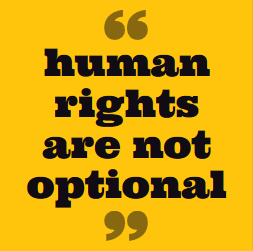 “ALL HUMAN BEINGS ARE BORN FREE AND EQUAL IN DIGNITY AND RIGHTS. THEY ARE ENDOWED WITH REASON AND CONSCIENCE, AND SHOULD ACT TOWARDS ONE ANOTHER IN A SPIRIT OF BROTHERHOOD.” ~United Nation Charter, 1945

Some dictionaries define the word right as ‘a privilege’. When used in the context of ‘human rights’, we are talking about something more basic. Every person is entitled to certain fundamental rights, simply by the fact of being human. These are called ‘human rights’ rather than a privilege. They are ‘rights’ because they are things you are allowed to be, do, or have. These rights are there for your protection against the people who might want to harm or hurt you.

They are also there to help us get along with each other and live in peace.

Human rights are the basic rights and freedoms that belong to every person in the world, from birth till death. These are norms that aspire to protect all the people from severe political, legal, and social abuses. Human rights are moral principles or norms that describe certain standards of human behavior and are regularly protected as natural and legal rights. They apply regardless of where you are from, what you believe in, or how you choose to live your life. They can never be taken away, although they can sometimes be restricted.

They are inherent to all human beings; regardless of race, sex, nationality, ethnicity, language, religion, or any other status. Human rights include the right to life and liberty, freedom from slavery and torture, freedom of opinion and expression, right to work and education, and many more. Everyone is entitled to these rights, without any form of discrimination.

India’s Human Rights Act is in conformity with the Paris Principles, adopted for the protection and promotion of human rights in Paris (October, 1991) and endorsed by the UN General Assembly on 20 December, 1993.

The Indian National Human Rights Commission (NHRC) is responsible for the protection and promotion of human rights. The chairperson and members are appointed by president of India, based on the recommendation of a high-power committee.

The Bill amends this to provide that a person who has been Chief Justice or Judge of a High Court will be the chairperson of a SHRC. The chairperson and members of the NHRC and SHRC will hold office for five years

or till the age of 70 years, whichever is earlier. The Bill reduces the term of office to three years or till the age of 70 years, whichever is earlier. Further, the Act allows for the reappointment of members of the NHRC and SHRCs for a period of five years. The Bill removes the five-year limit for reappointment. The Bill allows the Secretary-General and Secretary to exercise all administrative and financial powers (except judicial functions), subject to the respective chairperson’s control and changes in the union territories. The Bill provides that the central government may confer on a SHRC human rights functions being discharged by the union territories. Functions related to human rights in Delhi’s case will be dealt with by the NHRC.

The NHRC will consider the key recommendations of truth and reconciliation commission. Basically, the bill is to strengthen the NHRC and SHRC to help the human rights to protect our civil society. The National Human Rights Day is a day to celebrate the real meaning of constitution and democracy. However, it is a very bad sign that most of the humans don’t even know about all their rights, autonomy, and democratic power. Also, they lack the knowledge about the human rights and Right to Information Act.