AIJS and ICTS for Judicial Vacancy 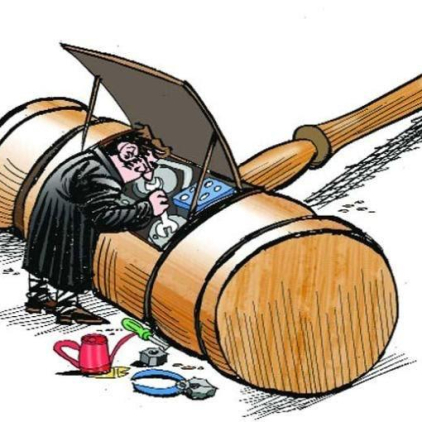 The Indian Constitution distinguishes between three organs of the state – legislative, executive and the judiciary. The existence of these three organs is at the fulcrum of a properly functioning state.An effective balance while maintaining proper division of powers is critical to a modern state. Any organization or body requires constant changes to fit in the contemporary realities. One without change is unable to absorb the needs of present society and fails to deliver. Over the years, since independence, many reforms have been proposed for the judicial system of our country but differing opinions have placed a pause on any developments. However, recent talks about AIJS (All India Judicial Service) and ICTS (Indian Courts and Tribunal Services) have been doing the round as proposed reforms for the judiciary.

The one hundred and sixteenth report of the Law Commission of India is about the formation of an All India Judicial Service. The question whether judicial service should be organized on an all- India basis or should be left to each state was examined in 1946. The opinion was that there was no necessity for organizing subordinate judiciary on all – India level.Swaran Singh Committee, 1976, dealt with the question of organising judicial service at an all-India level. It refers the problem of all-India Judicial service of the Government for their consideration and decision after consultation with the State Governments. Commenting on the proposal whether judicial service should be organized on an all-India level then the Chairman of the Law Commission' expressed in his personal opinion an apprehension that no lawyers with sufficient practice would like to face the prospects 'of transfer by applying for the posts of subordinate judges. It may be said that practising lawyers joining Indian Judicial Service would form a small fragment of it as per the scheme envisaged in this report. Article 45 of the Constitution (Forty-fourth Amendment) Bill, 1976 deals with Article 312 by introducing the words including all-India judicial service after the words all-India service and before the words common to the Union and the States. The All India Services Act(1951) which was enacted to regulate the recruitment of services of persons appointed to the union and states covers the Indian Administrative Service and Indian Police Service.Article 312 has a provision for the creation of one or more All India Services common to Union and state.

The government has proposed the formation of an All India Judicial Service which will be based on the Union Public Service Commission (UPSC) and its pattern of conducting examsto fill judicial vacancies.According to what has been proposed as of now,a lawyer with seven-year practice or someone engaged in teaching at a recognised law college for the same time period could sit for the exam. A person meeting this criteria and aged between 28 and 35 will be able to take the exam. Moreover, just as the UPSC exam gives the candidate an option of 22 Indian languages listed in the 8th schedule of theIndian constitution for taking the exam in, the government wants to conduct judicial exams in multiple languages too to remove the barriers of language. In 2019 the Union law minister, Ravi Shankar Prasad said in the Rajya Sabha that It is high time to have an All India Judicial Service on the patterns of central civil services such as IAS and IPS to rope the talent in the judiciary. The exams for the judicial services are conducting at the national level like UPSC and under the Supreme Court's control where we can induct the best talent. There is also a provision for reservation of people from the Scheduled Caste and Schedule tribes. The government is planning to set this up by March 2022.

The proposal however does not have unanimous acceptance. According to a report by the Vidhi Centre for legal policy the very reasons for which the AIJS has been pitched, i.e. solution to judicialvacancies, lack of representation for the marginalized on the bench and the failure to attract the best candidate are incorrectly diagnosed.The report highlights that instead of focusing on creation of AIJS it is more important to figure out the reasons for large number of vacancies in poorly performing states and rectify that. The issues of local language and customs are the issues that deserve serious consideration before moving ahead with the creation of the AIJS.

India has a population of 135 crores and there’s no wonder that this puts a huge burden on the administrative services of the country. Even more so, the number of pending cases in judiciary is increasing. As per November 2019 data, there are 59,867 cases pending in the Supreme Court and 44.75 lakh cases in high courts. In district and subordinate court, the number of pending cases stand at a shocking 3.14 crore. While the All India Judiciary Service has been in the talks for a long time and has faced many obstacles in its implementation, the ICTS (Indian Courts and Tribunal Services) has been a recent development. Based on the premise that the Indian judiciary faces a huge backlog of cases and that merely appointing new judges does not solve the matter, it aims to increase the productivity of judges and also focuses on involvement of technology to reduce the delays experienced by people and achieve better judicial outcomes.

A working paper (No. 258) on How to Modernise the Working of Courts and Tribunals in India defines ICTS as an entity that provides high quality administrative support services to a court or tribunal. It further sets the roles that will be performed by ICTS as providing leadership to the task of re-engineering court procedures; providing administrative support to courts and tribunals by implementing these procedures and advising the legislature and judiciary on legal reforms. It can be set up as a company, executive order agency; national trust or a statutory corporation.It further proposes instructions as to the governing body of ICTS. It defines its composition ascomprising of judicial members, a chief executive officer and independent members. To ensure judicial independence,the judicial members must always be more than half of the total number of board members.

The Indian judiciary can move forward as these structures; after working out the kinks, are in place. The integration of technology into the long existing organ of the state can help ensure speedier justice. For example, there has been an establishment of LIMBS,a web-based application for monitoring cases involving the central government of India in a more transparent and efficient manner. Timely interventions and reforms, while ensuring that independence of judiciary is maintained will help the country provide equal and quality access to justice for all.