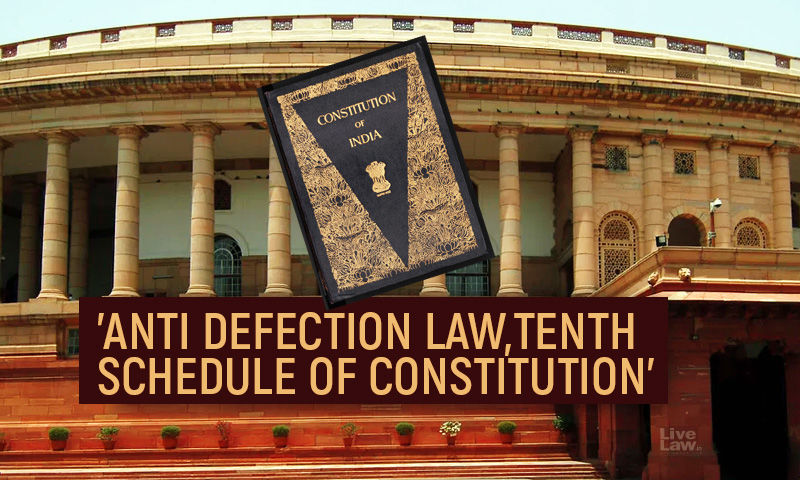 India is the largest democracy in the world. Immediately after attaining independence in 1947, recognizing the struggles of the masses of the nation, India came about as a representative democracy. Since then, without fail, elections have been conducted to elect representatives of the people. These elections have offered people a fair choice in who gets to govern them and make decisions to lead the country forward. Though seen as a very fair means in making people part of the process, the journey to ensuring free and fair elections has been fraught with its own challenges. Right from conducting the first elections, which proved to be a herculean task considering the large population of the nation, to the elections of 2019, the journey of India has been arduous and eventful.

In a bid to prevent defection, Anti – defection law came into being in the year 1985. The Indian Constitution was amended to add the 10th schedule by the 52nd amendment. This law applies both to the parliament and state assemblies.

Under the tenth schedule, a person can be disqualified on the grounds of defection:

(a) If he has voluntarily given up his membership of such political party; or

There are however, certain exemptions under this law. In case where two – third of the legislators of a part want to merge with another party and the merge happens, neither the members who decide to merge nor the people who stay with the original party will face disqualification. Any person elected as chairman or speaker can resign from his party, and re-join the party if he demits that post.

Decision in the Kihota Hollohan Judgment

The Kihoto Hollohan case of 1992 challenged the power of the speaker with regard to Paragraph 6(1) of the Tenth Schedule: “If any question arises as to whether a member of a House has become subject to disqualification under this Schedule, the question shall be referred for the decision of the Chairman or, as the case may be, the Speaker of such House and his decision shall be final.” The petitioners questioned the sweeping power given to the speaker (whose decision could be clouded by bias) which violated the doctrine of Basic Structure — the judicial principle that certain basic features of the Constitution cannot be altered by amendments by Parliament. The majority judgment authored by Justices M N Venkatachaliah and K Jayachandra Reddy of Supreme Court answered this question in the affirmative: “The Speakers/Chairmen hold a pivotal position in the scheme of Parliamentary democracy and are guardians of the rights and privileges of the House. They are expected to and do take far reaching decisions in the Parliamentary democracy. Vestiture of power to adjudicate questions under the Tenth Schedule in them should not be considered exceptionable.”

The Dinesh Goswami Committee constituted for electoral reforms in 1990 gave the following recommendations for amendments:Disqualification provisions should be made specifically limited to cases of (a) voluntarily giving up by an elected member of his membership of the political party to which the member belongs; and (b) voting or abstention from voting by a member contrary to his party direction or whip only in respect of a motion of vote of confidence or a motion amounting to no-confidence or Money Bill or motion of vote of thanks to the President's address.

Politics is often seen as something bad and people are increasingly associating it with practices of horse trading, blame game and mudslinging. A major cause of this remains that actions of these political figures are sometimes causing harm to the system as a whole. Everyday political crises which arise and don’t reach a conclusive point makes the people lose faith in the system and question the authority of those meant to govern them. It is in this situation of uncertainties and new challenged that the anti – defection law needs to be analysed. Although the goal of anti – defection law is to ensure a stable government, it restricts a legislator from voting based on his conscience and what their constituency wants; it reduces the accountability of the government to the parliament and the people. Also, it places the presiding officer in a position of power and they might take a politically partisan view.A recent case in Karnataka highlights the use of anti – defection law. As many as 17 MLAs resigned from the Congress – JD(S) alliance.The former Karnataka speaker took a controversial decision in disqualifying the 17 MLAs for the rest of the current assembly’s term, so that they do not contest by-elections to seek re-election and resume their membership of the house. The bench, however, struck down this action of the speaker as unconstitutional, and declared them eligible for contesting the by-elections to the assembly. Several experts and committees since the inception of the law given measures as to what steps can be taken to remove any faults from this law. Seeking the advice of the Election Commission on the matter of disqualification and having stronger principles of intra – party democracy are just a couple of solutions.

This law was meant with the best intentions to ensure a stable democratic environment for the masses, but every now and then people have figured out loopholes to cheat the system. For the benefit of both the people and the legislators, a system to minimise these loopholes is the need of the hour. This will ensure that legislators and free to act in the true spirit of democracy and for democracy.