Can Hospitals Refuse to Admit Patients? 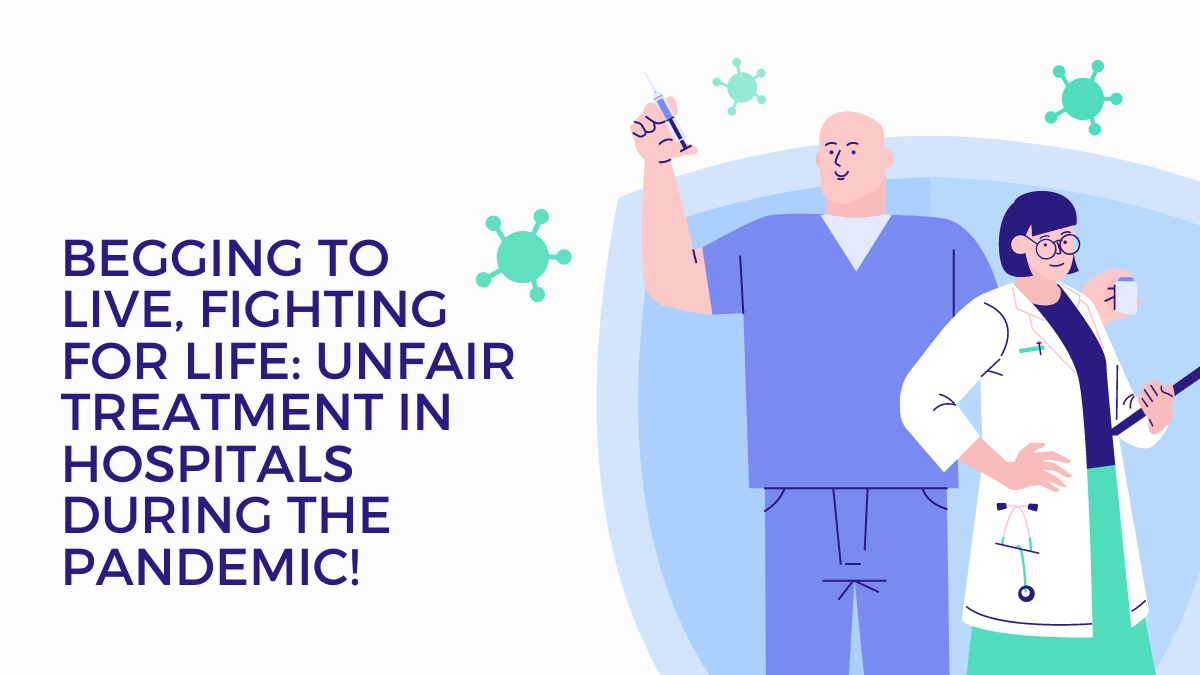 “Hospitals must provide emergency treatment to all who walk through the door, regardless of their citizenship status or ability to pay” – Gary Miller.

Hospitals are the central point in people’s lives. The beginning and end of the life takes place at the hospital for most people. These institutions are primarily responsible for treating patients, maintaining, and coordinating the health care facilities; organizing free camps in rural areas; and enlightening the people about various diseases, their treatment, and the precautions that should be taken by the people to lead a safe and healthy life.

But sometimes, the business relationships come in the way of dealing with patients in order to maintain the hospital’s position and reputation and also to make all the sources available. Basically, there are two types of admissions for patients.

A) Emergency, when the patient is severely injured through an accident or has other serious problems like moderate to severe pain, difficulty problems, bone damage, or any other chronic illness. Then, the patient should be directly admitted to the hospital and allotted a bed.

B) Elective, when the patient usually belongs to high service class and is treated like the VIP patient by the entire hospital staff. All the facilities for such kinds of VIP patients are beyond the expectations for a common man. And it is in such situations that the best doctors provide or are forced to provide or attend to these VIP patients, while the patients in the general wards and emergency rooms are attended to by the interns or the junior staff. In some way or the other, they are been refused the treatment by the best or senior doctors.

But this is not always the case. Sometimes, there might be situations where the hospitals are not having proper equipment that is required for the treatment of the patient. Secondly, there is a shortage of hospital staff. So, it is unable to attend more patients. Thirdly, the hospital might refer the patient to other hospitals where they thought that the patients would get better treatment and can recover soon. These are also some cases where the patients have been refused admissions by the hospitals.

In the former case, the refusal is for the sake of making money from the VIP patients, which is totally wrong and injustice to the common men. In other cases, the rejection is because the hospitals do not have proper resources for treating the patients, which is admirable because they are at least telling the truth to the patients and not giving them false hopes or playing with their emotions. So, from the discussions, it is clear that the rejection of patients should not be done on the ground of race, caste, socio-economic status, etc.

Conditions after the Outbreak of COVID-19

The Respect and Faith in Doctors

In North America and Europe, for instance, there are at least four models which depict this relationship: the paternalistic model, informative model, interpretive model, and deliberative model. Each of these suggests different professional obligations of the physician towards the patient. For instance, in the paternalistic model, the best interests of the patient, as judged by the clinical expert, are valued above the provision of comprehensive medical information and decision-making power to the patient. The informative model, by contrast, sees the patient as a consumer who is in the best position to judge what is in her own interest, and thus, views the doctor as chiefly a provider of information. In India, we find that the doctor and patients have even stronger relationships because people here regard doctors as God. The former have immense faith on the doctors and in any condition, they believe that the latter will save life. Thus, the refusal to admit patients is not only ethically wrong but also wrong for the humanitarian perspective. It not only makes patient suffer but also snatches away their hope to live.

Legislations and Actions for Hospitals

In India, there are various legal provisions related to patient's rights that are scattered across different legal documents, such as The Constitution of India, Article 21, Indian Medical Council (Professional Conduct, Etiquette and Ethics) Regulations 2002, The Consumer Protection Act 1986, Drugs and Cosmetic Act 1940, Clinical Establishment Act 2010 etc.

Right to Emergency Medical Care - As per Supreme Court, all hospitals, both in the government and in the private sector, are duty bound to provide basic emergency medical care, and injured persons have the right to get emergency medical care. Such care must be initiated without demanding payment/advance and basic care should be provided to the patient irrespective of paying capacity.

Every patient has the right to receive treatment without any discrimination based on his or her illnesses or conditions, including HIV status or other health conditions, religion, caste, ethnicity, gender, age, sexual orientation, linguistic or geographical/social origins.

Every patient and their caregivers should be able to administer feedback and create comments or lodge complaints concerning the health care they're receiving or had received from a doctor or hospital. This includes the proper to lean data and recommendation on the way to give feedback, create comments, or create a criticism in a very straightforward and easy manner.

If a non-public hospital refuses to treat a non-Covid-19 patient, it will cause cancellation of its medical registration licence. Multiple grievances of patients being turned away in private or public hospitals leading to denial of critical health services, which are not related to Covid-19, has led the Ministry of Health and Family Welfare and Delhi’s Health Department to clarify that no person should be denied healthcare in the time of need. In an order, Padmini Singla, Secretary, Delhi’s Department of Health said, “Non- compliance will be viewed seriously and action as per provision of law, including cancellation of registration of defaulter hospital or nursing home, will be initiated without further notice.”

Still, we need a stricter action on such hospitals and doctors who refuse to admit patients or charge heavily for discharge or makes unnecessary bills for profit. It is not a business; it is a kind of social work that is a big need for any country. Strict compliance to rules and ethics is important to keep the dignity of this noble profession intact.

The Scenario in India

Amidst the increase in numbers, the infrastructure facilities are creating issues for many individuals, particularly the poor. With the common dengue fever treatment price capped at around rupees forty thousand as per medical practitioners, tons of poor patients suffering from dengue fever are being refused treatment under beneath the State-run Aarogyasri insurance theme. The ever-increasing cases of dengue fever have led to a shortage of beds in hospitals. In fact, dengue fever and connected complications don't seem to be even lined beneath the empanelled list of diseases. This has left several patients scouting for treatment options, with many of these patients ending up at state-run hospitals. This was breaking news in September 2019.

This shows the scarcity of resources in hospitals. Recently, we were told about the high scarcity of ventilators in our hospitals. The beds are always insufficient to handle the patients at the time of outbreak of diseases. The toll in the outbreak of Acute Encephalitis Syndrome (AES) in Bihar rose to 114 with seven more deaths in the endemic zone. This is happening since three consecutive years during August – September. It happened this year too. We are lacked in infrastructures and medical facilities, losing 100+ children. Sri Krishna Medical College and Hospital (SKMCH) in Muzaffarpur had insufficient beds, less medical staff, and the patients faced struggles to get admission. Many mothers were found on the floors, holding their children in lap and receiving treatment. However, a lot was spend when the Health Minister visited, including the expenses of cleaning the hospital, white-washing, carpets etc. The water was stagnant outside the children’s ward but the Minister’s helped to get rid of that too. This shows the ignorance and brutality of medical staff in treating kids. This also shows the lack of medical facilities provided by government. Despite knowing everything, they still couldn’t save those kids.

The healthcare allocation in the Union Budget 2020-21 is just a modest increase of 5.7% to Rs 67,484 crore from the revised estimate of Rs 63,830 crore in the previous year and falls short of the target of spending 2.5% of GDP on healthcare, experts note. Experts said that despite the limitations, announcements like eradication of tuberculosis by 2025, Viability Fund Gap support for hospitals in Tier 2 and 3 cities to meet the requirement for Ayushman Bharat, PPP model hospitals in 112 aspirational districts and making 2,000 essential medicines available through Jana Aushadhi stores to common man, will benefit the healthcare sector. Viability Gap Funding to set up hospitals and medical colleges in the most undeserved districts will go a long way in addressing the shortage of beds and enhance geographical accessibility under the PMJAY programme, said Dr. Rana Mehta, Healthcare Leader. But is this the ground reality? No, because our rural population is still unaware about such schemes and lacks the medical facilities. In urban areas too, we mostly find only low income people in government hospitals due to the degraded quality of hospitals and scarcity of infrastructure. Also, sanitation specialist doctors are not found in government hospitals. Generic medicines are still not within the reach of common man.

India has improved its ranking on a global healthcare access and quality (HAQ) index from 153 in 1990 to 145 in 2016, yet ranks lower than neighbouring Bangladesh and even sub-Saharan Sudan and Equatorial Guinea. Generally, countries that spent more on health per capita and had better health systems scored higher on the HAQ index, the study found. This strengthens the case for India to increase its healthcare spending. India spends just 1.4% of its Gross Domestic Product (GDP) on health, as IndiaSpend reported on 30 January, 2016. The World Health Organisation recommends that countries spend 4-5% of their GDP on healthcare to achieve universal healthcare. This proves that so far, our government has failed to allocate sufficient funds for healthcare. There has been ignorance on the government’s part in terms of this sector. Despite of availability of less beds in hospitals, poor quality of government hospitals, scarcity of medical staff in government hospitals etc., the government has not taken any big steps to cure this problem. The hospitals’ denial to admit patients is the denial towards their professional ethics which is not acceptable. Why should the license of such doctors not be cancelled to set an example?

How to Ensure No Refusal and No Confusion

This situation could possibly be handled in two ways:

A) The government should declare a list of hospitals where the admission of COVID positive patients is allowed. These hospitals should be decided such that there must be at least one or two hospitals in every locality so that it would not a create lot of trouble for the patients.

B) Every hospital should divide the hospital into two parts where the COVID positive cases and the patients suffering from other diseases should be treated without any trouble.

C) There must be a single platform or app that has all the updates about all the private or government hospitals, beds, patients, specialist doctors, distance, etc. This will increase accessibility and timely reach of patients to the hospital. By creating this app, there would be vigilance by the government on the hospitals as well.

D) The budget allocation on healthcare needs to be enhanced to ensure more than sufficient beds, abundant medical staff, and ample resources. There must be timely and proper inspections to ensure the sanitation, facilities, treatment, attendance of staff and hospital atmosphere.