Colorism: The Real and Recurrent Problem in India 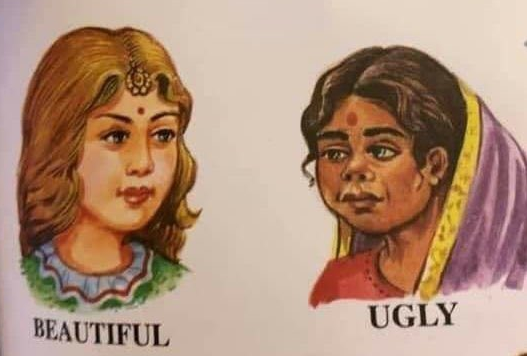 Humans come in different shapes and sizes, and a variety of skin tones as well. An alternative take on the Bible has a story, wherein God, while creating mankind, made sure to give us all different beautiful shades for our skin. Upon seeing this, an Angel asked him, “but why not make them all the same?” God replied, “So that they may find beauty in their own diversity.”

The above picture is an example of what beauty looks like according to a children’s book in India. India, as we all know, is a geographically large and demographically diverse nation. Over 17% of the entire world’s population calls India home, which is bound to have a wide range of beauty standards, one would assume. Sadly, there are not many characteristics one must fit into to be deemed socially attractive. You must have a slim to medium sized body, reasonably tall stature, and a pleasing face. But, most importantly, all of these qualities would amount to nothing if you fail to check one specific box: fair skin.

Colorism can be understood as the prejudices and discriminatory behaviours one faces, based on the darkness of their skin. The fairer, the better. Fairness of skin has been associated with positive human attributes suck as wealth, high economic status, class, likeability, talent, social soundness, and high personal regard. Dark skin is often times attributed to social lowness, crime, poverty, poor hygiene, poor morality, violence, and even evilness.

It is shocking how prevalent this phenomenon is, even outside India. Many countries, if not most, prefer individuals who are light skinned. South-east Asian countries like South Korea, Indonesia, Thailand, the Philippines, and Vietnam are infamous for their growing use of skin laser treatments and skin bleaching as measures to reduce the melanin in their skin. Historically, peasants who worked in the fields had dark skin due to the harsh outdoor conditions; whereas the Noblemen stayed protected and unfazed by the sun and rain, and consequently, had light skin.

Even the countries in the African continent have been experiencing this effect for centuries. Back when Africa was the centre of the world for Slave trade, between the 16th and 19th century, lighter-skinned Africans were sold for higher prices and better positions, such as cooks, maids, butlers, and nannies. Meanwhile, dark skinned individuals were sold off cheap and into positions far worse, including cleaners, washers, plantation workers, and even sex slaves. (Notice that I mentioned, sex-slaves, not sex-workers. The ones falling victim to this practice were not paid for their services. Rather, they were used repeatedly, like an object of pleasure.)

The superiority of light skin was always being subliminally conditioned to Indians. Around 1000 B.C.E., the light-skinned Aryans invaded India, home to the naturally-dark skinned Dravidians. After them, there were the Persians, Mughals, French, Portuguese, and British, who all had lighter skin. Essentially, by the time the British ruled us, the superiority of the term “Gora” (white) had become a prominent social theme.

The profundity of persecution in South Africa made Nelson Mandela, a progressive standard fabulousness, and numerous others like him: Oliver Tambo, Walter Sisulu, Albert Lutuli, Yusuf Dadoo and Robert Sobukwe — all men of exceptional strength, wisdom and liberality. Gandhi oversaw to induce a task from the dealers in Durban to prompt and help them in managing the activities of the Natal government and neighbourhood specialists against them. They offered 300 pounds a year in retainers. The prompt issue was the proposition to expel the voting rights of the few wealthy Indians who had them. In restricting the framework of purport of indentured work from India, Gandhi pointed out that it was incorrect to the interface of the Africans. India banned export of labour to Natal in 1911.

The course and colour partialities carried by Gandhi from India were fortified by the shippers and white officers he worked with. In countering the contentions of the white racists, he attempted to show that Indians, unlike like the Africans, had an old civilisation.

Even today; products of beauty, lavishness, and richness are endorsed by foreign models with perfect milk-white skin, in India; a predominantly dark skinned country. Monetisation, of such a vastly felt insecurity was somewhat of a masterstroke played by the company Unilever. It is the same company that gave us Fair & Lovely, in 1978. The company described this product to be “one of the most trusted brands for women in India”, which interestingly comes with side-effects such as rashes, acne, skin burns, and permanent skin discoloration. Also, the biggest marketing strategy ever played by a company in India was the enforcement of the idea that a dark skinned person is unsuccessful and unhappy. As they attain lighter skin, they will not only have get happiness and success, but will receive also social validation and respect. Preposterous, right?

In India alone, skin lightening products such as bleaching kits, fairness creams, and fairness face-packs are some of the most frequently bought cosmetic supplies. Brands like Fair & Lovely, Fair & Handsome (because insecurity is not gender-bound), Garnier, Lakme, and Nutrogena have become household names and continue to grow exponentially. In fact, by 2023, the women’s fairness cream market in India will surpass ₹5000 crores. Internationally, the skin bleaching market of Asia was valued over $13 Billion, in 2018.

Multiple studies found that the preference for lighter skin in India was historically linked to both the caste system as well as the Persian, Mughal, and British rule. Colorism in India got fuelled due to certain events under British colonial rule: the British officials consistently demeaned dark-skinned Indians and favoured light-skinned Indians over dark-skinned Indians for jobs. As a result of hundreds of years of British colonial influence, remnants of the British tactics that exacerbated colorism still remain in Indian society. Other forms of colorism in India can be seen in the cosmetic industry where the "fairness" creams meant to lighten skin are popular, and in the Bollywood industry, where the majority of actors and actresses hired are light-skinned. Moreover, actresses are often photo-shopped to look lighter, as discussed in the 2019 film Bala.

Another common occurrence is calling dark skinned children and even adults using names such as Kalu, Kali, Kalua and Kaaliya: all variants of the word ‘Black.’ This term has become so deeply hardwired into our minds, owing to the society we live in and the media that we are surrounded by.

People with darker skin are and have been facing discrimination, bias and even hate in different areas of life, for centuries. Even today, a matrimonial ad will openly value a “fair bride/groom” over educational qualifications or social standing. Kids are bullied by their peers for looking a certain way, and face difficulty making friends and feeling accepted. Young men and women face rejection in romantic relationships and are, at times, even insulted for showing wilful attraction to someone who is fairer or conventionally more attractive than them.

The civil rights movement (also known as the American civil rights movement and other terms) in the United States was a decades-long struggle by African-Americans to end legalized racial discrimination, disenfranchisement, and racial segregation. The movement had its origins in the Reconstruction era during the late 19th century, although the movement achieved its largest legislative gains in the mid-1960s, after years of direct actions and grassroots protests. The social movement's major peaceful resistance campaigns inevitably secured modern securities in government law for the human rights of all Americans. After the American Civil War and the annulment of slavery within the 1860s, the Reconstruction Amendments to the United States Constitution allowed liberation and sacred rights of citizenship to all African Americans, most of whom had been oppressed till then. For a brief period, African Americans did vote and hold political offices, but they were progressively denied civil rights, regularly subjected to Jim Crow laws, and affected by the separation and sustained violence by the whites within the South. Over the following century, different efforts were made by African-Americans to secure their lawful rights.

Seeking employment is a whole different ball game. Up until a few years ago, the paper-bag test was used to determine whether or not a person is allowed entry into an organisation. It was very straight-forward, actually. The candidates were supposed to hold a typical, plain, brown paper-bag, close to their face. If their face was lighter or the same colour as the bag itself, they were allowed entry into the organisation. If they were darker than the bag, however, they had to step back as they were not permitted to enter the premises.

#BlackLivesMatter was established in 2013 in reaction to the vindication of Trayvon Martin’s killer. Black Lives Matter Foundation, Inc. is a worldwide organization within the US, UK, and Canada, whose mission is to remove white supremacy and construct local control to mediate in the viciousness delivered to the dark communities by the state and vigilantes. By combating and countering acts of viciousness, making space for Black imagination and discoveries, and centring Black joy, we are bringing about quick changes in our lives.

Casteism and prejudice, in spite of the fact that they have distinctive histories, are not distinctive. Rather, casteism claims a few kinds of divine mandate. So #dalitlivesmatter appropriates that the struggle of Black people over centuries is a bit harsh. It is an attempt to create a common cause, and seek solidarity from Black Lives Matter, a movement that by the very fact that it is taking place in the US, is more powerful and visible than any other. In India, casteism has come under the radar of international scrutiny for so long—a Project of Unseeing, joined by some of the best known, most respected intellectuals and academics. Having said that—nobody is above racism. It takes different forms in different places. In South Africa, for example, there is xenophobia amongst Black South Africans towards Nigerians and Africans from other African countries.

People with dark skin have reportedly shown higher levels of social insecurity, body dysmorphia as well as have encountered more frequent bullying than their lighter-skinned counterparts. They are also more likely to have lower levels of self-confidence, self-esteem, and a distorted self-image.

As astoundingly ridiculous it may sound, it is a reality which has impacted several people and destroyed many lives. From parents favouring the fairer child as compared to the dark skinned one, to an employer providing his light skinned employees with more opportunities than their dark counterpart; colorism is everywhere.

You may switch on your TV and see an otherwise light skinned actor covered in dark makeup. This is done to make him/her look stereotypically funny, poor or evil, almost like a badly done caricature. More commonly, you’ll find a light-skinned, North-Indian, 20-something actress, romancing a South-Indian actor old enough to be her father, who is covered in layers and layers of foundation, several shades lighter than his skin. In the very same movie, you’ll find a dark-skinned South-Indian actress, playing the role of the lead’s friend, who is unpopular and is target of most jokes. You’ll also notice that the villain is a cruel, merciless man with very dark skin, surrounded by scantily-clad Western/European models, used as mere set accessories.

To change this mindset, we need to change the biasness we show. There should not be any discrimination on the basis of colour. Colorism has spread so much that various reformists have constantly worked hard to bring equality in society in terms of colour. No one should feel less important because of their skin colour. This world looks beautiful due to different cultures, traditions, dresses, cuisines, and people. Let’s keep it that way.