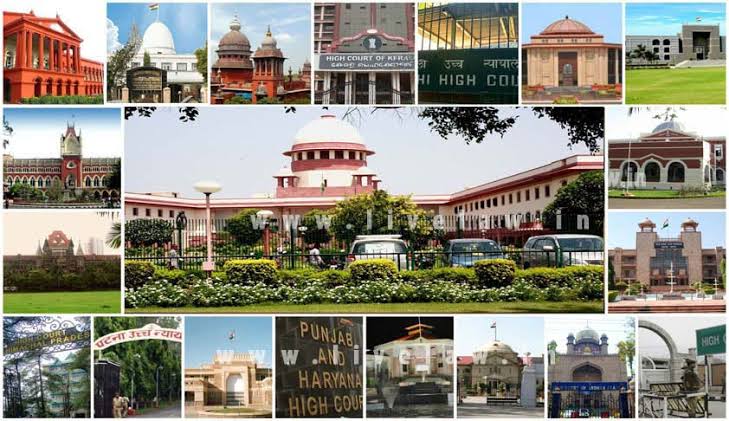 Our country India is in the midst of the second wave of Covid-19.It’s been a year since the country is under the threat of a deadly virus. The people of India have come a long way to avoid this noxious situation, from taking major precautionary measures like carrying a sanitiser,wearing masks, to lighting up a diya and thali bajao abhiyan just to give respect to the frontline workers and what not. But now, the question is why the people are suffering more when we have surpassed the initial stage of the crisis already? Why is the government not able to hear the voices of the people suffering, when it is a high time to save life. These questions were asked by the guardian itself, i.e. the Judiciary.

This is not the first time, when the judiciary has stepped into the actions of the executive. Judicial intervention is required to spell out the boundaries of the executive power. As the common people suffer due to failures, the courts are making sure that the political authorities should be held to account. In this instance,about 11 high courts came up just when they saw that the government officials are not able to carry out their commitment towards the society. The courts of Delhi, Allahabad, Patna, Kolkata, Hyderabad, Ahmedabad, Nagpur, Aurangabad, Mumbai, Bangalore and Chennai are hereby hearing petitions filed by the people with regard to Covid-19 crisis in their respective states. The contentions and criticisms given by the high courts against the government responsibility were more comforting. However, some facts say that Indian government is engaged with only two companies who all are providing vaccines to the individuals, Serum institute of India (SII) and Bharat Biotech. In which Serum institute of India asserts that they were not known that the centre contemplated a Billion doses in such a shorter span of time.

Moreover, on 27th of April 2021 the Delhi High Court confronted the Aam Aadmi Party government saying that their confidence is shaken by such irresponsibility of the government towards the people of the national capital in handling up the Covid-19 crisis. To add up, the court slammed the government and directed to manage the distribution of oxygen cylinders in a legitimate way and ensure medical oxygen supply indubitably to the needy ones and to take a note on the black marketing of the Covid-19 drugs and oxygen cylinders.

Whereas Gujarat high court put forward a reality check and exclaimed the state government for not filing a proper and valid response to the court, the bench of chief justice Vikram Nath and justice Bhargav Karia said that Ahmedabad Municipal Corporation should not follow a policy of admitting patients only through 108. The court also confronted the state on the scarcity of supply of medical oxygen, and questioned the government as to why the patients in spite of paying 10 times for an oxygen cylinder,were not getting the oxygen? Directed the hospitals, to admit everyone,whosoever is in critical condition irrespective of the fact that whether the patient has come from an ambulance or any other vehicle.

On April 19, Allahabad high court by pulling up the Uttar pradesh government for it's weak approach towards handling the crisis ordered complete lockdown in about 5 cities Prayagraj, Lucknow, Varanasi, Kanpur and Gorakhpur — till April 26.

The court said that the government has failed in providing efficient treatment to the patients who all are in critical condition, by noticing the "inhuman condition" at the quarantine wards, a division bench of Justice Ajit kumar and Siddhartha Verma held that, they are disappointed with the measures taken by the government, and they should not follow the attitude of "my way or no way", one should take suggestions from all the sectors.

However, the order of the high court was struck down by the Supreme Court after the Uttar pradesh government's protest.

In Tamil Nadu, the Madras High Court did not pointed out the drawbacks of the government but the court laid emphasis upon the Election Commission for "not stopping the political parties from doing campaigns and rallies", which are responsible for the huge gathering on the roads, resulting in a high number of Covid cases. The court alleged that a charge of muder should be imposed on the panel, because this institution has brought a sudden hike in the Covid cases.

A bench of Chief Justice Sanjib Banerjee and Justice Senthilkumar Ramamoorthy said: "you should be put up on Murder charges probably, as the panel of the Election commission is highly responsible for not putting an end to political rallies when they were violating the Covid-19 protocol.

On the other hand, the Delhi High Court on 13th May 2021, questioned about the advantage of the caller tune which is used aa part of the Central Government's Covid-19 vaccination awareness program, the court said that, What is the point of a musical tune playing everytime one's make a call, asking people to get vaccinated, if there are no vaccines in the first place, to add up the court mentioned that "you have been playing that one irritating message on the phone, for i don't know how long, that we have the vaccination when you actually don't have the vaccination".

The vaccination program for 18-44 age groups started in the first week of May on account of low supply. The bench of Justice Vipin Sanghi and Justice Rekha Palli, were administered to look into the hearing petitions with regard to the health situation in the National Capital.

The courts are going so far with their allegations and contentions upon the central and state officials, as they believe that the preventive measures were not put together just for the Indian public, the measures and protocols should be followed by each and every class in the most righteous manner, because the state of affairs is now substandard and we all need to abide by the norms which are beneficial for the community as a whole.

The Judiciary had no choice but to step into this matter for many reasons, firstly it's a matter of public safety and importance, to safeguard the people and act as a guardian. Secondly, to maintain the vision of equality into the eyes of each and every being ,living in this democratic country, regarding medical treatment.

If an organ has a power to provide stability to the whole body then one should try in every possible way to make it happen, and in the light of the current situation, the Judiciary is acting as an organ to maintain check and balance in the whole country by reacting to every move of the central and state government on public welfare.