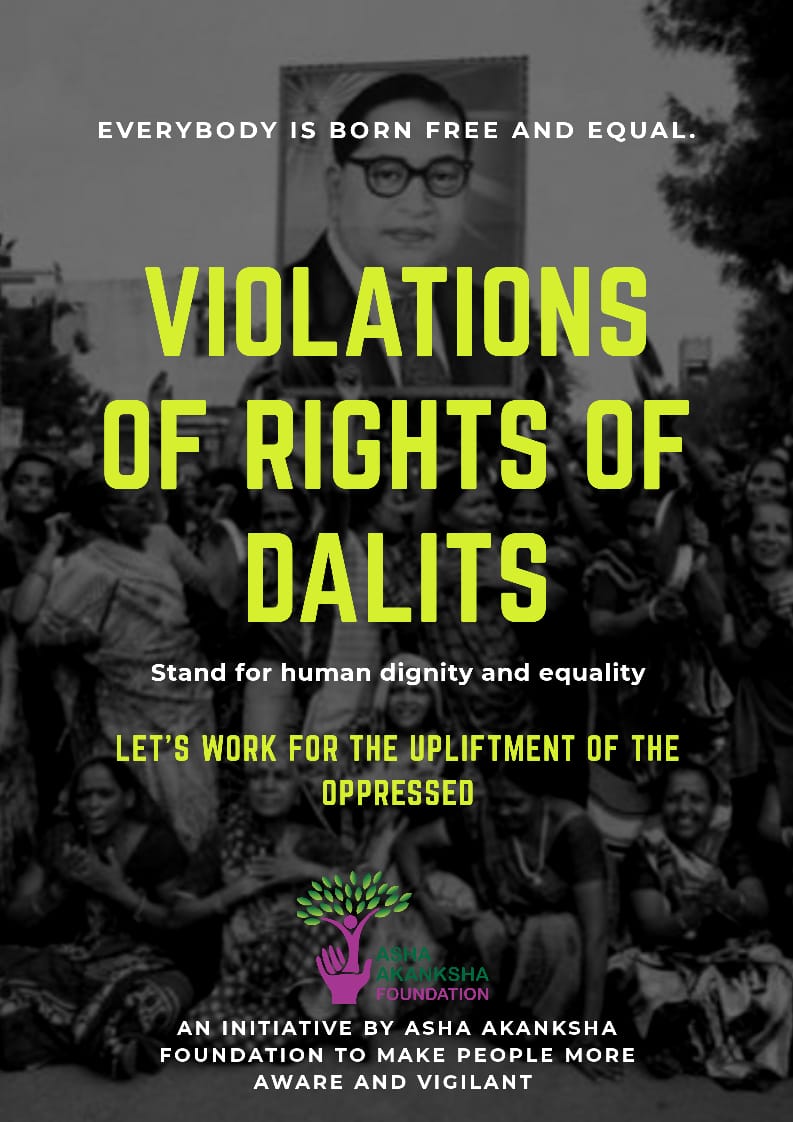 Over one-sixth of Indians are shunned by much of Indian society because of their rank as “untouchables” or Dalits at the bottom of India's caste system. They are discriminated against, denied access to land and basic resources, forced to work in degrading conditions, and routinely abused by police and dominant-caste groups under the state's protection.

Historically, the caste system has formed the social and economic framework for the life of the people of India. This system is divisive and follows a hierarchy amongst people and make them into groups where rights are given on the basis of birth. They are termed as outcasts falling outside the traditional four classes of Brahmin, Kshatriya, Vaishya, & Shudra. Dalits are typically considered low, impure & polluting based on their birth and traditional occupation, thus they face multiple forms of discrimination, violence, and exclusion from the rest of society. Beginning in the 1920s, various social, religious and political movements rose up in India against the caste system and in support of the human rights of the Dalit community. The Constitution, on its formation, departed from the norms and traditions of the caste system in favor of Justice, Equality, Liberty, and Fraternity, guaranteeing all citizens basic human rights regardless of caste, creed, gender, or ethnicity. The implementation and enforcement of these principles has been a failure.

Despite the fact that “untouchability” was abolished under India's constitution in 1950, the practice of “untouchability”remains very much a part especially in rural India. “Untouchables” may not use the same wells, visit the same temples, drink from the same cups in tea stalls, or lay claim to land that is legally theirs. Dalit children are frequently made to sit in the back of classrooms, and communities as a whole are made to perform degrading rituals in the name of caste.

Most Dalits continue to live in extreme poverty, without land or opportunities for better employment or education. With the exception of a small minority who have benefited from India’s policy of quotas in education and government jobs, Dalits are relegated to the most menial of tasks, as manual scavengers, removers of human waste and dead animals, leather workers, street sweepers, and cobblers. Dalit children make up the majority of those sold into bondage to pay off debts to dominantcaste creditors. Dalit women face the triple burden of caste, class, and gender. Dalit girls have been forced to become prostitutes for dominant-caste patrons and village priests. Sexual abuse and other forms of violence against women are used by landlords and the police to inflict political “lessons” and crush dissent within the community. Less than 1% of the perpetrators of crimes against Dalit women are ever convicted. The plight of India's “untouchables” elicits only sporadic attention within the country.

Public outrage over largescale incidents of violence or particularly egregious examples of discrimination fades quickly, and the state is under little pressure to undertake more meaningful reforms. Laws granting Dalitsspecial consideration for government jobs and education reach only a small percentage of those they are meant to benefit. Laws designed to ensure that Dalits enjoy equal rights and protections have seldom been enforced. Instead, police refuse to register complaints about violations of the law and rarely prosecute those responsible for abuses that range from murder and rape to exploitative labor practice and forced displacement from Dalit lands and homes.

Laws and government policies on land reform and budget allocations for the economic empowerment of the Dalit community remain largely unimplemented. Dalits who dare to challenge the social order have often been subject to abuses by their dominant-caste neighbors. Dalit villages are collectively penalized for individual “transgressions” through social boycotts, including loss of employment and access to water, grazing lands, and ration shops. For most Dalits in rural India who earn less than a subsistence living as agricultural laborers, a social boycott may mean destitution and starvation. The present time is an historic moment, not only for Dalits, but for all those committed to basic human rights and principles of justice, equality, liberty, fraternity.