Drug - Stereotype of Poor versus Rich 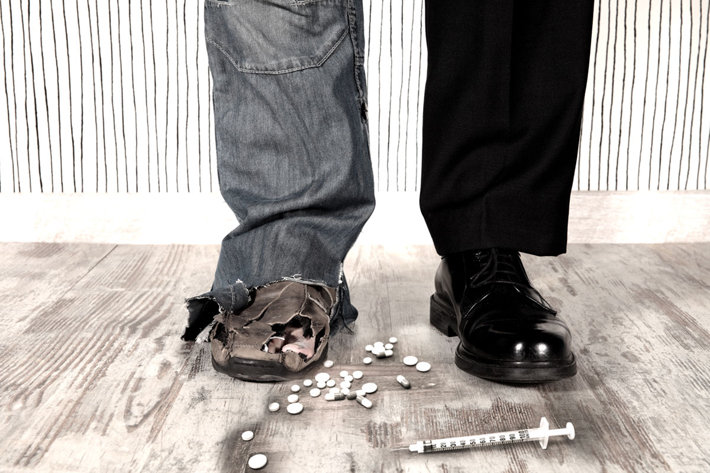 The divide has always been prominent; some may call it a paradox while some are calling it a dichotomy. The co-existence of slums and posh areas has been highlighted time and again, the argument about inequality of resources has been substantiated through the divide between rich and poor, haves and have-nots. This division on theory takes different forms practically, that of double standards. The question here is of substance abuse. While it has been endorsed as a standard of being cool and hip amongst peers (songs often glorifying the use of drugs) it is essentially portrayed as a menace while done by the poor. An article on sunrisehouse.com talks about the cultural stereotypes associated with the consumption of substances in the U.S. It highlights the correlation between socioeconomic classes and drug abuse. The lower class is thrown into this spiral because of the stress of poverty and unemployment. The rich on the other hand, are mostly idle and thus resort to taking drugs as the lack of the need to work for a living.

Even though this idea and this division has long existed, it is important to analyse the distinct factors affecting different socioeconomic groups and come up with effective solutions. An article in The Economic Times on Chitta Economy explains how the business of drugs works in Punjab. The drug problem in Punjab is not just restricted to the unemployed youth but it transcends gender, class, age and geography. According to a study conducted by Indian Journal of Psychiatric Nursing “There are many reasons for initiation of substance abuse such as easy availability, peer pressure, suggestion of friends, imitation of parents etc. A descriptive study on 50 drug users from 6 villages of Punjab found that peer pressure or influence, addiction in family history and exposure to drugs were found to be main instigators for youth to indulge in drug abuse. Factors responsible for continuation of drug abuse were mainly withdrawal symptoms and social labelling of addicts. The main consequences of addiction among youth were found to be negative impact on health, loss of social reputation and broken families”.

Drug use has debilitating consequences for those who consume drugs as well as their families. Apart from the wide ranging physical deficits that a person experiences it leads to a severe disruption in family life, sickness, death, extramarital relations, shirking away from responsibilities and draining of financial resources. The person who takes drug is just not left at that but as a part of multi – marketing strategy also gets involved in the peddling of drugs. The Golden Crescent region of South Asia—comprising Afghanistan, Iran, and Pakistan—is a principal global site for opium production and distribution. When the drug enters India from Pakistan, it’s cost increases manifold. Now, an individual from a lower class background who cannot afford drugs on a daily basis is offered a deal by the drug dealer to sell ten and get one. Thus, the drug addict also gets involved in drug trade as a last resort to get drugs.  A political nexus is also formed wherein police has also been engaged in drug dealing.

Dealing with this menace requires a two fold approach to target rural and urban areas and get to the core of the reasons as to why people across varying ages get involved in dug abuse. A common focus however should be on working to eradicate the practice of consuming drugs as something cool (which should be tried at least once in a lifetime, for many people this becomes a habit) Since family history is an important factor in drug addiction, these individuals should be aided early along in their life to be counselled against drug abuse. With regards to people just doing it out of boredom or unemployment, the government should create decentralized institutions for recreation, employment and monitoring. Media can play a huge role in impacting the mind of the masses of India and coming out with success stories of people who have battled their addiction. Engaging celebrities to participate in campaigns against drugs can have a long lasting impact on people and help in creating a negative attitude towards drugs. An effective strategy in place today to curb demand, supply and harm caused by drugs can go a long way in curbing the menace of drug abuse.