Glow and Lovely’ is still a skin whitening cream! But Beauty has no skin tone 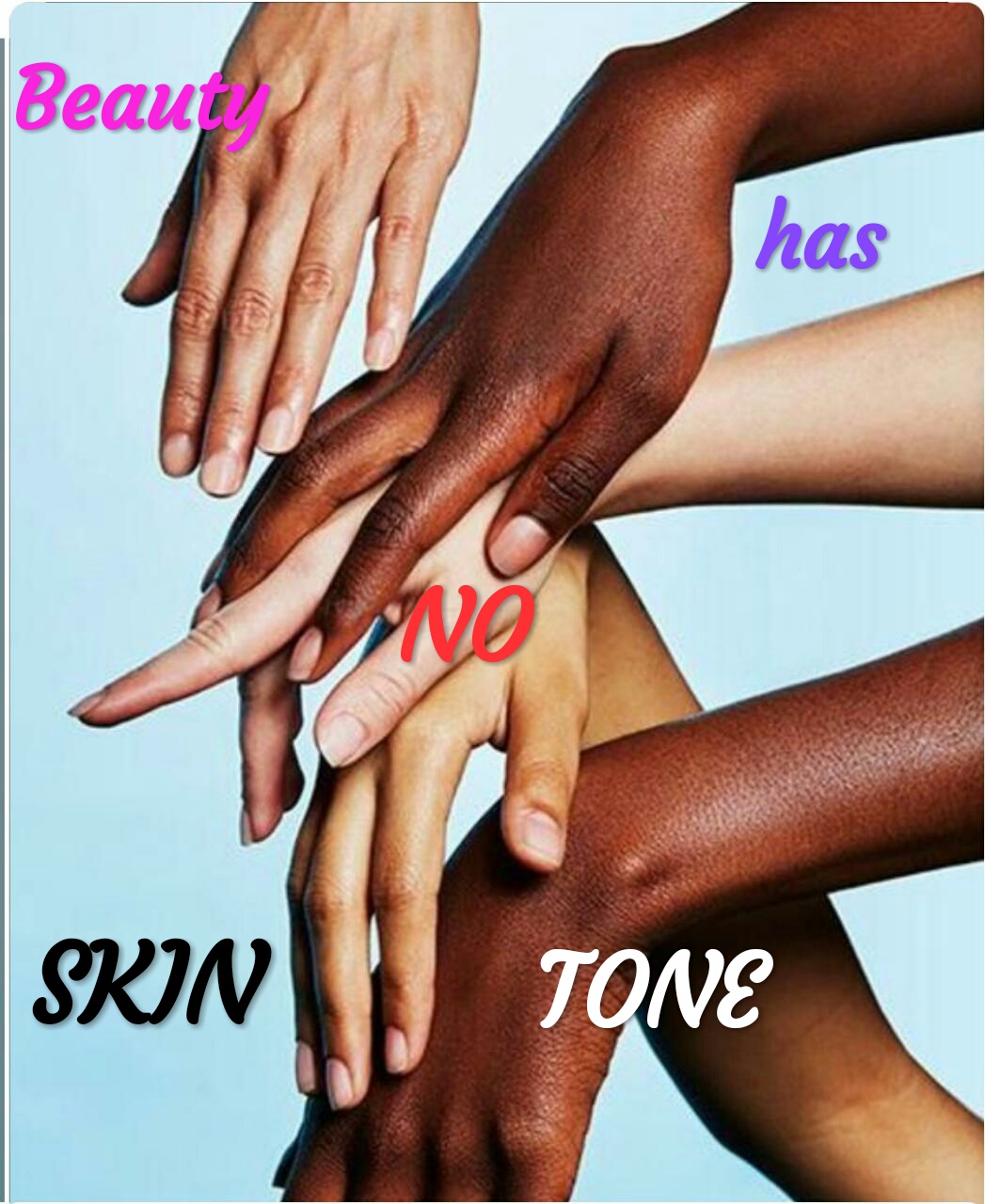 Recently a hospitalization of a California woman again pulled the Skin-lightening cosmetics under the spotlights. According to the report of the Daily Beast, a woman of 47-year-old, resident of Sacramento, used a product Pond's “Rejuveness” which is a version of the company’s anti-wrinkle cream that is made and sold in Mexico. Someone in the Mexican state of Jalisco tampered the cream with a toxic, skin-tightening substance which had a devastating effect on the lady and she showed up at the emergency room with slurring speech, unable to walk or feel her hands and face. She now lies semi-comatose in a hospital.

“Hating people because of their color is wrong. And it doesn’t matter which color does the hating. It’s just plain wrong.” ----- Muhammad Ali.

Under the growing fame of skin-whitening or fairness products in India is one of the most baseless biases experienced and practiced. According to a study, the fairness cosmetics industry is a huge business in India, worth almost US$180 million, and a growing at a rate of 10% to 15% annually. In 2017, the skin lightening industry was worth about $5.8 billion globally. Colorism or skin color stratification is a process that privileges light skinned people over the dark in areas such as income, education, housing and the marriage market. According to a study, light skinned people are financially better off, more educated, live in better neighborhoods and marry higher status people than darker skinned people. Even elevated rates of blood pressure are also well documented in dark skinned people.

Recently a product of Unilever, “Fair and Lovely” changed the product name to call out racism but they are still selling skin-lightening products. Unilever, the consumer goods multinational that owns brands including Dove, Noxzema, Vim, Ben and Jerry's and Q-Tips, is coming under the pressure for their public support of racial justice movements. Skin lightening brands build up a blooming business. According to WHO, 77% of Nigerian women regularly used skin lightening products, where in India, it was 61%.

Why we think such?

There is a typical framework for the endorsements of the fairness cream in India that begins with portrayal of the problems of a dark-skinned person. Their major target is women. They are likely to portray a dark-skinned woman who is suffering from her low self-confidence and insecurity and unable to secure success in life until someone suggests her to use a fairness cream. Then the advertisement shows her radical transformation, not only does she become several shades lighter, but her entire personality undergoes a drastic change. She becomes a successful woman, confident and self-assured because of the ‘whiteness’. The advertisement ends with her achievement of a desirable marriage proposal. The camera is highlighting her clear and happy face. This cosmetic industry now started selling their products to the Indian men too. Fair and Lovely has found its male counterparts in Fair and Handsome cream for men. These show that the dark – skinned individual are shy, not liked by anyone and has been unsuccessful in life while as one becomes fair-skin, there comes confidence and success and these advertisements are being seen by our children since childhood thus, they are brought with the idea that having dark complexion is unfortunate.

According to study, this unfair importance of ‘fairness’ in determining life outcomes widely studied for the black culture remains an unaddressed discourse in India. Parents play an important role in searching for the life partner for their children in the arrange marriage culture of the society. The study examined many cases and gave two hypothesis which are:

So, the society clearly discriminates the youth and it breaks them apart. A focused group discussion with Indian women found that the obsession with fairness and the related attributes of beauty, attractiveness and marital success continues to rule. Matrimonial advertisements are found to request correspondence for arranged marriages based on age, religion, caste, regional ancestry, education, professional qualifications, income and skin tone. Where earning capacity plays an important role for male individual, physical attractiveness and more precisely skin color play an important factor for a female counterpart in the culture of mate selection. “Looking for a slim, homely, and ‘fair’ girl for our son” is a common feature in matrimonial endorsements.

The skin color is totally genetic and no one has control over that. People born with their color which they get from their ancestral genetics. But due to this so-called skin-whitening discrimination, people started losing their trust from themselves. They started using the cosmetic products. And the outcome of that is either no change on their skin tone or damaging the skin layer more. These products contain some toxic chemical named calomel which is also a form of mercury. Mercury is a heavy metal used in things like thermometers, batteries and mirrors, and long-term-exposure can cause some serious problems like:

 Tremors, numbness or tingling in extremities or around lips, tongue

Internalized racism itself reveals variety of situations in work place where people of color reject or criticize those with dark skin. According to a study, in context of work settings, dark-skinned women receive more rejections than equally qualified more dark-skinned men. All these collectively make an impact on people where they have started trying to change their skin tone in lighter shades. They started using various skin bleaching treatments, steroid application as well as skin whitening cosmetic products which in future will have deleterious side effects. You may see that almost all the models, actresses, brand ambassadors etc. are chosen of fair-complexion. The brides in India are persuaded to take a month beauty course prior to her marriage where during her marriage, her pictures show her bright and white colored. But why we hide our own complexion?

Many studies have proven that skin color discrimination is one of the major causes for psychological distress, symptoms of depression and days in poor mental health. People face social inequalities. The interpersonal racism has many impacts including prejudicial statements, aggression, violence, bullying and harassment. Some people live in fear of being victimized and this chronic mental stressor have been shown affecting the children’s mental health. The precise influences can result in hopelessness, difficulty adjusting and recovering from trauma. And there is evidence of psychosis and depression, substance abuse and anger who are exploited to this racism or colorism.

Why we don’t raise voice against it?

The Fair and Lovely is now Glow and Lovely. The star behind this movement is Chandana Hiran, who started a petition on change.org and get many people sign for the change in the narratives in the advertisement and branding of product. In an interview to a media publication, Chandana has said, “It's absurd how so many girls of my skin color find almost no representation of their skin tone in popular culture. I find no leading actresses of my color; I find no magazines or ads endorsing my skin color. Even filters on social media platforms and photo editing sites constantly focus on making you look fairer.” Her PIL has actually did justice to the society and aware many people. Since childhood, we are seeing the advertisements of products as the fair face can bring success only.

A Public Interest Litigation has urged the Bombay High Court to direct the Government and local authorities to issue guidelines so to ensure that cosmetic goods, personal hygiene products, skin and hair care creams and lotions are sealed before being sold in the Indian market. The PIL said that currently such products are sold without seal and this results in contamination or adulteration of the goods which is harmful to the health of the consumer. Use of contaminated or adulterated products can cause skin irritation and rashes or other health hazard which should be prevented in consumer interest, the PIL, filed by advocate Geetanjali Dutta, contended. The petitioner said that a leading multinational company had in a letter replied that sealing of cosmetic products is not a mandatory requirement of India and hence it was not following the procedure to seal the goods before selling them in the market. Final verdict was in favor of petitioner with making it mandatory to seal products.

We are not contesting our rights. We see the wrong campaigning but never protest against it. We should take stand against such products and advertisements. Just because of hectic procedure and long time in resolution, the people are unwilling to stand for it. In other countries, there is very strict rules for campaigning. The wrong or false advertisements are opposed by people and PIL filed immediately to ban such advertisements. The Red Bull product has its tagline – it gives you wing which is not allowed to show in USA but in our country, this is there. So, that is the lack of PIL and awareness of people or you can say ignorance of people towards the false branding. We need to take step to stop such branding.

Solutions that may Improve things on Ground

Solution doesn’t lie in the change of the name, but solution does lie in banishing the overall skin discriminatory products.

Authority can take the responsibility to ban all the trading of skin whitening products.

The multinational companies should start selling of skin care or moisturizer products rather than the skin bleaching products.

And there should be given an utmost importance to the public awareness. It is important to note that, in our historical culture dark skin, not white skin, was considered to be ideal and desirable in India. Some examples are the popularity of God Krishna (literally black) and Draupadi (also called Krishnaa), a character from the epic Mahabharata. Krishna is worshipped in many parts of India whereas Draupadi was considered to be one of the most desirable women in the world. Every skin color should be celebrated above all the discrimination. Unfortunately, we always represent Krishna idols or roles in blue color instead of black to hide the real color. We even discriminate our lord.

The celebrities should stop endorsing the skin whitening products. Rather they can make themselves the icon of promoting impartiality to all the skin colors. Recognizing this bias can be the preliminary step towards making amends.

Also, there should be more platforms for the dark- complexion women, portraying only fair- complexion models in advertisements and shows increase discrimination. The brands have to convert themselves to show the clear and true products which don’t convert skin tones but only brighten and moisturizes the skin.

I am born by the grace of God and every child is his blessing,

Like you, I can also study, climb, paint, dance and sing,

Then why am I needed to change my appearance

The society need to change their vision lens

A person needs to be kind, honest, understanding and helpful

The beauty lies in every face, the heart must be beautiful!