History of Caste System in India 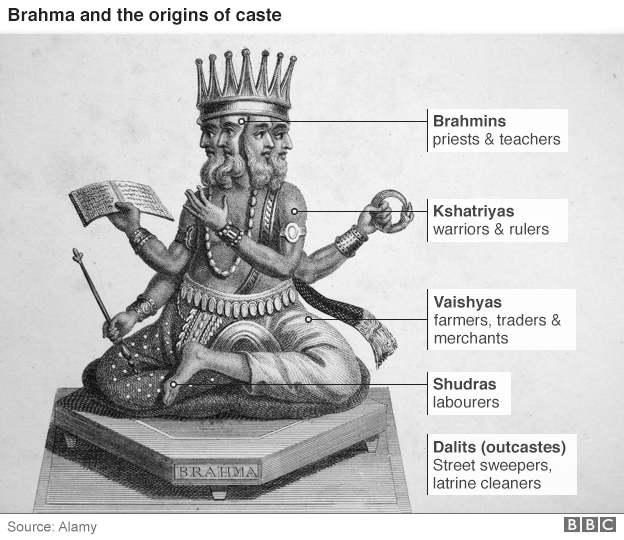 Social stratification was recognised as an important thing to do all over the world in order for society to function well. This social stratification has been done on various basis, depending on time and place. Some of the basis are religion, region, skin colour, economical standing etc.

India’s caste system which divides Hindus based on their Dharma (duty) and Karma (work) is among the world’s oldest social stratifications. It is believed to be more than 3000 years. There exist different theories on how the origin of this system. Let’s just go through those theories and dig more about the topic at hand.

Brahma the Hindu God of Creation

This is yet another theory about how did caste system came into existence. Aryans arrived in India around 1500 BC. They began conquering North India and sabotaged the culture practised by locals during that period because they had high disregard for them.

Aryans divided themselves into three major groups known as Brahmins, Kshatriyas and Vaishyas. Unlike previous theory, Vaishyas consisted of farmers and craftsmen. Brahmins and Kshatriyas struggled long for power which resulted in Brahmins taking over the top position in hierarchy.

As they conquered parts of India, they made locals their servants. Therefore, these locals under their rule emerged as another group in the hierarchy, known as Shudras.

There are popular stories in history where devil women seduced male human being. They are believed to be true in a way to tell about blood of fair skinned Aryans who came to India from ancient Iran mixing with Indian women, resulting in half Aryans. These half Aryans were also categorised as Shudras along with the servant class locals.

Stratification based on Karma or work

In ancient times it was common for children to get into same profession as their family or mainly the men of the house, so to say the whole family belongs to same line of work. In process large number of families with same profession socialise which is to be expected as an inevitable part of human nature. These large group gatherings result in formation of communities such as farmers or craftsmen.

Aryans came to realize their presence and made amendments to the caste system. People got placed in the social hierarchy based on their karma or the work they do. This didn’t mean that previous way to look at society got out of picture. It can be said that forming jatis or communities actively based on karma is much more in depth classification inside the one based on dharma.

Shortcomings of Caste System Down the Line

In old times, the weaker sections of society did not have any power to stand their ground against discrimination. This had been the case for a long time, does not mean that it was a right thing to do. It was still a historical injustice.

In order to correct this, several laws have been made. Quotas were announced in government jobs and educational institutions for scheduled castes and scheduled tribes in 1950. They are considered to be at the rock bottom in the social hierarchy of caste. In 1989 the benefits of quota were extended to Other Backward Castes (OBC). They lye somewhere between traditional upper and lower castes on the social hierarchy.

Although laws are in the place now to protect the weak against discrimination and to safeguard their rights, true equality is still far from reach of our hands. Society still discriminate the ones at the bottom, not openly but beneath the surface. Even so we can’t get discouraged and always have to keep moving forward with the aim to make the society ideal for one and all.