How Humans Have Disrupted the Nitrogen Cycle. 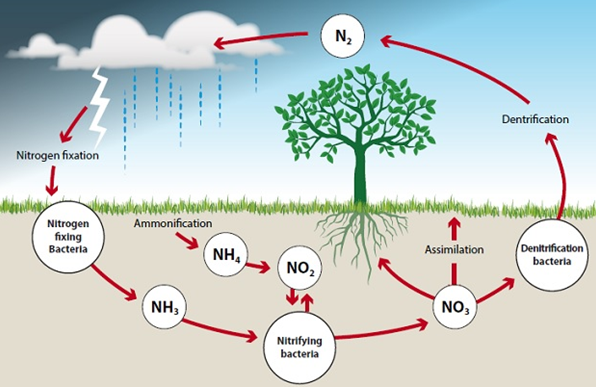 Human activities are greatly increasing the amount of nitrogen cycling between the living world and the soil, water, and atmosphere. In fact, humans have already doubled the rate of nitrogen entering the land-based nitrogen cycle, and that rate is continuing to climb. This human-driven global change is having serious impacts on ecosystems around the world because nitrogen is essential to living organisms and its availability plays a crucial role in the organization and functioning of the world’s ecosystems. In many ecosystems on land and sea, the supply of nitrogen is a key factor controlling the nature and diversity of plant life, the population dynamics of both grazing animals and their predators, and vital ecological processes such as plant productivity and the cycling of carbon and soil minerals. This is true not only in wild or unmanaged systems but in most croplands and forestry plantations as well. Excessive nitrogen additions can pollute ecosystems and alter both their ecological functioning and the living communities they support.

A study by the UN clearly indicates the gravity of the situation. Perhaps the best evidence for this perturbation comes from air trapped in layers of quasipermanent ice in the Arctic and the Antarctic. Ice cores taken from these two polar regions give us a 2000‐year record of the Earth's atmospheric composition. This record indicates a striking constancy in nitrous oxide concentrations, at approximately 285 parts per billion, for nearly 1500 years. Since about 1600 AD, however, nitrous oxide concentrations have been increasing, and the present‐day atmospheric burden of this gas is greater than at any other time in the past two millennia. Furthermore, nitrous oxide concentrations continue to increase, currently at a rate of about 0.3% per year. These variations indicate that many nitrogen flows are now larger than in preindustrial times, and other evidence suggests that human activity is responsible.

Causes: Most of the human activities responsible for the increase in global nitrogen are local in scale, from the production and use of nitrogen fertilizers to the burning of fossil fuels in automobiles, power generation plants, and industries. However, human activities have not only increased the supply but enhanced the global movement of various forms of nitrogen through air and water. Because of this increased mobility, excess nitrogen from human activities has serious and long-term environmental consequences for large regions of the Earth.

1.     Atmosphere: The disruption of the Nitrogen cycle has led to the release of various nitrogen oxides into the atmosphere. These oxides are pollutants and greenhouse gases and are about 300 times more polluting than carbon dioxide. These contribute to global warming and ultimately, climate change.

Here’s what can be done to reduce the intensity of the problem:

1.     Engineering strategies to increase denitrification could help reduce the excess accumulation of fixed nitrogen. Similarly, technological approaches should be improved to help further control the release of nitrogen oxides produced in high-temperature burning of fuels.

2.    A major need for engineering innovation will be in improving the efficiency of various human activities related to nitrogen, from making fertilizer to recycling food wastes. Currently, less than half of the fixed nitrogen generated by farming practices actually ends up in harvested crops. And less than half of the nitrogen in those crops actually ends up in the foods that humans consume. In other words, fixed nitrogen leaks out of the system at various stages in the process – from the farm field to the feedlot to the sewage treatment plant. Engineers need to identify the leakage points and devise systems to plug them.

4.    Efficiency gains could also come from recycling of organic waste. Manure has always been regarded as an effective fertilizer.

Human activities during the past century have doubled the natural annual rate at which fixed nitrogen enters the land-based nitrogen cycle, and the pace is likely to accelerate. Serious environmental consequences are already apparent. Hence, it is urgent that national and international policies address the nitrogen issue, slow the pace of this global change, and moderate its impacts.