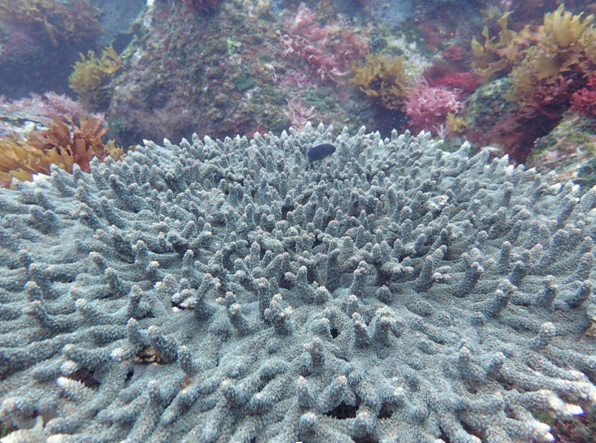 Ocean acidification is sometimes called “climate change’s equally evil twin,” and for good reason: it's a significant and harmful consequence of excess carbon dioxide in the atmosphere that we don't see or feel because its effects are happening underwater. At least one-quarter of the carbon dioxide released by burning coal, oil and gas doesn't stay in the air, but instead dissolves into the ocean. At present, our oceans absorb 22 million tons of carbon dioxide every day.

But this additional absorption of carbon dioxide into the oceans comes at the cost of changing the ocean’s chemistry. When carbon dioxide dissolves in seawater, the water becomes more acidic and the ocean’s pH drops. Even though the ocean is immense, enough carbon dioxide can have a major impact. In the past 200 years alone, ocean water has become 30 percent more acidic—faster than any known change in ocean chemistry in the last 50 million years.

The acidity of the ocean may hardly affect us, but it causes irrevocable damage to the marine ecosystems.

1.     Coral Reefs:Reef-building corals craft their own homes from calcium carbonate, forming complex reefs that house the coral animals themselves and provide habitat for many other organisms. Acidification may limit coral growth by corroding pre-existing coral skeletons while simultaneously slowing the growth of new ones, and the weaker reefs that result will be more vulnerable to erosion.

Acidification may also impact corals before they even begin constructing their homes. Coral larvae in acidic water had more trouble finding a good place to settle, preventing them from reaching adulthood.

2.    Oysters, Mussels, Urchins, and Starfish: Generally, shelled animals—including mussels, clams, urchins and starfish—are going to have trouble building their shells in more acidic water, just like the corals. This means a weaker shell for these organisms, increasing the chance of being crushed or eaten.

Of course, the loss of these organisms would have much larger effects in the food chain, as they are food and habitat for many other animals.

3.    Zooplankton: They may be small, but they are big players in the food webs of the ocean, as almost all larger life eats zooplankton or other animals that eat zooplankton. They are also critical to the carbon cycle. When shelled zooplankton die and sink to the seafloor, they carry their calcium carbonate shells with them, which are deposited as rock or sediment and stored for the foreseeable future. This is an important way that carbon dioxide is removed from the atmosphere, slowing the rise in temperature caused by the greenhouse effect.

But these organisms do not handle higher acidity very well, as their shells dissolve rapidly. One study even predicts that they will be extinct by the end of the century.

4.    Fish: While fish don't have shells, they will still feel the effects of acidification. Because the surrounding water has a lower pH, a fish's cells often come into balance with the seawater by taking in carbonic acid. This changes the pH of the fish's blood, a condition called acidosis.

The fish has to put its body into overdrive to bring its chemistry back to normal. To do so, it will burn extra energy to excrete the excess acid out of its blood through its gills, kidneys and intestines. It might not seem like this would use a lot of energy, but even a slight increase reduces the energy a fish has to take care of other tasks, such as digesting food, swimming rapidly to escape predators or catch food, and reproducing. It can also slow fish growth.

The ability to adapt to higher acidity will vary from fish species to fish species, and what qualities will help or hurt a given fish species is unknown. A shift in dominant fish species could have major impacts on the food web and on human fisheries.

Although Ocean Acidification is an increasingly recognised problem nowadays, no strict laws exist for its prevention. Ocean Acidification is an indirect consequence of increasing Carbon emissions. Some organisations like the EPA and NDRC are making positive efforts towards controlling this acidification. However, no governmental laws have been strictly implemented for the same. The Indian government has also recognised the grave dangers that this problem poses to marine life. Experiments have been conducted in the Bay of Bengal and the Arabian Sea to track the acidification of the ocean. The results raise an alarm over the catastrophe that is yet to befall us.

Although ocean acidification may not affect us directly, it is our duty as global citizens, to ensure the health and well-being of our planet and all its stakeholders. Here’s what you can do:

1.     The most realistic way would be to reduce our carbon emissions by burning fewer fossil fuels and finding more carbon sinks, such as regrowing mangroves, seagrass beds, and marshes, known as blue carbon. If we did, over hundreds of thousands of years, carbon dioxide in the atmosphere and ocean would stabilize again.

2.    Geoengineering can also help us artificially cut the amount of carbon dioxide being released into the atmosphere. But it would take years of scientific engineering to devise such methods.

3.    Try to reduce your energy use at home by recycling, turning off unused lights, walking or biking short distances instead of driving, using public transportation, and supporting clean energy, such as solar, wind, and geothermal power. Even the simple act of checking your tyre pressure can lower gas consumption and reduce your carbon footprint.

Perhaps the best way in which we can contribute is by making our acquaintances aware about the problem. Scientists themselves realised the existence of the problem fairly recently, so it figures that most people would not be aware about it. We must remember that we have not inherited this Earth from our ancestors; we have borrowed it from our children. Thus, we must leave it in the best shape possible.