How Urban Sprawl Damages the Environment? 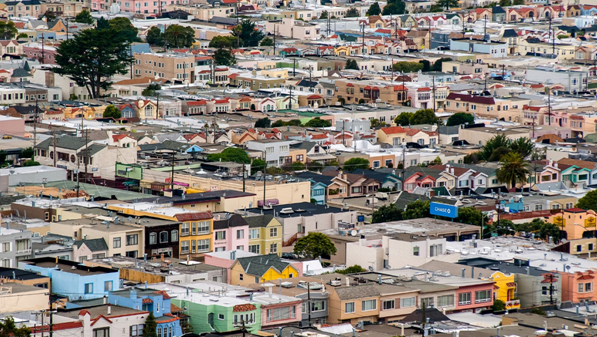 Urban sprawl is widespread development outside city centres, usually on previously undeveloped land. Also called suburban sprawl, urban sprawl is often created by developing farmland, forests, and wetlands. It is characterized by having few people per acre, homes that are separate from commercial and industrial areas, and branching street patterns.

Urban Sprawl is a major concern because of the following reasons:

1.     Transportation dependence: It results in increased dependence on automobiles and other vehicles, and high energy and water use. Urban sprawl often does not support the use of public transportation. Because homes are spread out and separate from places of work, stores, and services, residents must usually drive for all their travel.Moreover, this phenomenon can also cause increased traffic fatalities and jams, as well as increased car dependency.

2.    Environmental threats: Worsening of air and drinking water, threats to groundwater supplies, loss of agricultural capacity, high rates of polluted runoff, and increased flooding are all consequences of urban sprawl. Urban sprawl also contributes to longer commutes, high costs of services, and neglected city centres. It can lead to habitat loss for native species in the area, and thus allow more invasive species.

3.    Effects on human health: Although it ultimately affects each and every one of us, people who live and work in suburban areas marked by urban sprawl are at risk for harm from air and water pollution. People with heart or lung disease, older adults, and children are at greater risk for illness. Urban sprawl can lead to higher rates of obesity, high blood pressure, hypertension and chronic diseases.

4.    Economic Impact: Higher taxes and decrease in social capital are only some of the unavoidable consequences. In its path, urban sprawl consumes immeasurable acres of forests, farmland, woodlands and wetlands and in its wake, leaves vacant storefronts, boarded up houses, closed businesses, abandoned and usually contaminated industrial sites, and traffic congestion, which can stretch miles from urban centres and is creating a hidden debt of unfunded infrastructure and services, urban decay, social dysfunction, and environmental degradation.

Here is a quote that aptly expresses the problem at hand:

“Will Urban Sprawl spread so far that most people lose all touch with nature? Will the day come when the only bird a typical child ever sees is a canary in a pet shop window? When the only animal he knows is a rat- glimpsed on a night drive through some city slum? When the only tree he touches is the cleverly fabricated plastic evergreen that shades his gifts on Christmas morning?” -Frank N. Ikard

So? What can be done to tackle this issue? Here are a few solutions:

1.     Education:One of the biggest problems concerning urban sprawl is lack of education. If communities are educated about the negative impacts of urban sprawl, they are more likely to take action to prevent irresponsible development.

2.    Community Action: The community can be a solution to urban sprawl through involvement and action. The community can challenge local project lobby councillors to vote in favour of more sustainable development methods. Members of the community can also challenge the local government to partner with organizations that promote smart growth and new urbanism.

3.    Smart Growth: Smart growth is designed to combat urban sprawl by developing in a way that does not jeopardize the land or community. Planners and architects who promote smart growth seek to develop a stronger sense of place through a more compact way of development, also known as mixed-use.