Human Rights Of The Migrants 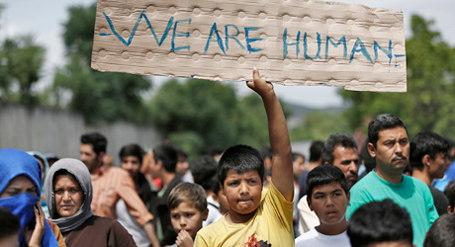 Who are termed as Migrants?

There is no actual definition of Migrants in law, but The International Convention on the Protection of the Rights of Migrant Workers and Members of their Families (ICRMW) defines migrant worker under Article 1 as “a person who is to be engaged, is engaged or has been engaged in a remunerated activity in a State of which he or she is not a national.” When we study population this is one important aspect which arises due to various social, economic, political reasons. To study the dynamics of the society, it is necessary to study the movement of population in different parts of the country.

In simpler terms "Migrants" can be defined as those people who change their place of living by moving from one place to another with an intention of settling, permanently or temporarily at a new location. Migration can be of 4 forms: Invasion, conquest, colonization and emigration/immigration.

According to Ernst Georg Ravenstein's proposal in the 1880s a certain amount of things having been said about the process of migration such as:-

1.every migration flow generates a return or counter migration.

2.the majority of migrants move a short distance.

The migrants move from one place to another due to multiple factors, according to some economist and researchers there are mainly two factors responsible for migration:-

Push factors: These are the factors which seem to be unfavourable to the people living there, thus they push themselves to some other location. This involves movement due to Not enough jobs, Few opportunities, Inadequate conditions, Political fear or persecution, Slavery or forced labor, Poor medical care, Loss of wealth, Natural disasters, pollution etc.

Pull factors: These are the factors which attract people to change their existing location. These include Job opportunities, Better living conditions, The feeling of having more political or religious freedom, Enjoyment, Education, Better medical care, Attractive climates etc.

Besides these factors there are several other reasons that are responsible for migration.

There are many incidents that define the in depth struggle of the migrants they face each and every day. One such major incident was of Covid-19, when certain migrants were forced to migrate because of ongoing complete lockdown. The covid-19 pandemic has hit the poor the hardest in India, the factories were locked, the workplaces were triggered to a greater extent, that has led to internal migration in India. Many of the migrants walking back to their hometowns, without food or water, have been using railway tracks to navigate their way in the long and unbearable Indian summer. During one such migration sixteen migrant workers in a group of 20 migrants were killed by a cargo train when they were sleeping on the railway track in Aurangabad(Maharashtra), they assumed that trains were not running due to lockdown.

Rights of the Migrants

Every human in this world enjoys some or more rights in order to be free from any kind of torture, slavery or arbitrariness.

We know that Migrants are those people who reside at a place other than where they are born. They change their place of birth not by will because of certain factors which are not always on the positive side. The migration can be because of job search, medical assistance or to fulfil their basic amenities. They tend to move to a new city and even in most cases a new country, where they sometimes feel unwanted or unsafe, thus apart from the rights given to the general public, some special rights are constituted for the migrants, and these rights are called "Human Rights".

International Human Rights applies to all human beings, regardless of the status of immigration. There are some basic rights such as rights to life and liberty, and security of person, Freedom from any kind of humiliation, torture or slavery, right to equal protection of law and freedom from discrimination, freedom from arbitrariness arrest and detention, all these Human Rights are protected by the International treaties.

Rights of Migrants at International Level

Under International law, migrants have rights on the basis of humanity. International Human Rights Instruments, treaties and documents for instance declarations, it applies to all the migrants.

The Rights given to the Migrants can be measured on the basis of principle or practice. Former deals with the treaties ratification and legal documents to protect the migrants whereas the latter requires to look into the implementation of the treaties whether they are exercised or applied in the correct manner or not.

These rights are mainly measured through a "Human Rights- based approach", it is an approach that only considers International Human Rights Instruments.

Some Important conventions and treaties:

• In 1948 "Universal Declaration of Human Rights was adopted by the general assembly on 10 december 1948 which concluded that Human Rights are Universal and are to be enjoyed by all people, no matter who they are or where they live. This declaration recognised that the dignity of all human beings is the foundation of freedom, Justice and Peace in the world.

• In the year 1946 International Labour Organisation came up with Convention no.97 concerning Migration for employment, this convention covers the issues regarding the migration caused in search for employment and provides equal opportunity of job, guaranteeing basic rights and health care.

• The International Convention on the Protection of the Rights of Migrant Workers and Members of their Families (ICRMW) was adopted on 18 December 1990, this treaty not only provided civil and political rights to the migrants as well as economic, social, and cultural rights. Article 1 of (ICRMW) defines Migrant workers as a person who is to be engaged, is engaged or has been engaged in a remunerated activity in a State of which he or she is not a national.”

This treaty gives the same rights to the irregular and non documented migrants and defines them as a migrant who is not “authorized to enter, to stay and to engage in a remunerated activity in the State of employment.

• UN Protocol against the Smuggling of Migrants by Land, Sea and Air defines smuggling as the "procurement" or illegal entry of a person to a state to which the person is not a national or permanent resident. This protocol provides protection to those person who are smuggled and to give right to personal life and liberty and right not to subject to any kind of torture of cruelity.

• International law also provides protection against any kind of Discrimination, the International Covenant on Economic, Social and Cultural Rights adopted on 16 December 1966, guarantees that the rights included under this convention should be applied to all the migrants irrespective of their language, religion, sex, political opinion birth status etc.

What Rights Do Migrants Have in India?

India is a founder member of the International Labour Organisation, in which India has ratified 37 out of 181 conventions. The Indian Constitution validates all the fundamental principles which are given in the seven core International Labour Standards. India has ratified 3 standards out of seven and they are:- 1. No.29 gives rights to Forced Labour

The constitution of India provides the principle of equality between men and women. Several laws have been enacted to provide safety and to improve their living conditions and to give minimum wages to laborers.

The National Commission on Rural Labour in India(NCRL1991) estimates more than 10 million migrants in rural areas. It has been observed that there are large numbers of seasonal migrants who move from one place to another in search of a job, or workers involved in agricultural works, constructions or plantations.

Migration is a recurring process that will never end, people will locate themselves according to their wants and needs, thus Human Rights plays a vital role in determining their safety and to improve their living conditions. The International Labour Organisation has played an important role in promoting International Labour Standards. More than 90 percent of the total workforce is engaged in the unorganised or informal sector, like migrant labour.

Migrant workers do not always change their place of birth as per their will, but they often change their location because of their conditions. Migrant workers who work in any unorganised sector under any trade unions, where the labour standards are not protected by the government, they do not get minimum wages and no minimum work hours have been fixed for them, they work for endless hours and often paid less. They are usually illiterate, ignorant and belong to backward communities.

Even in some cases migrant workers under organised sectors suffer a lot, for which strict laws should be formed in order to protect Migrant people in all circumstances. We need to focus upon these issues and should extend these Human rights to all segments of the labour market, and to ratify all reasonable conventions that are made to protect the life and dignity of Migrant people.