Life Will Exist on Earth Till the Time Water Does 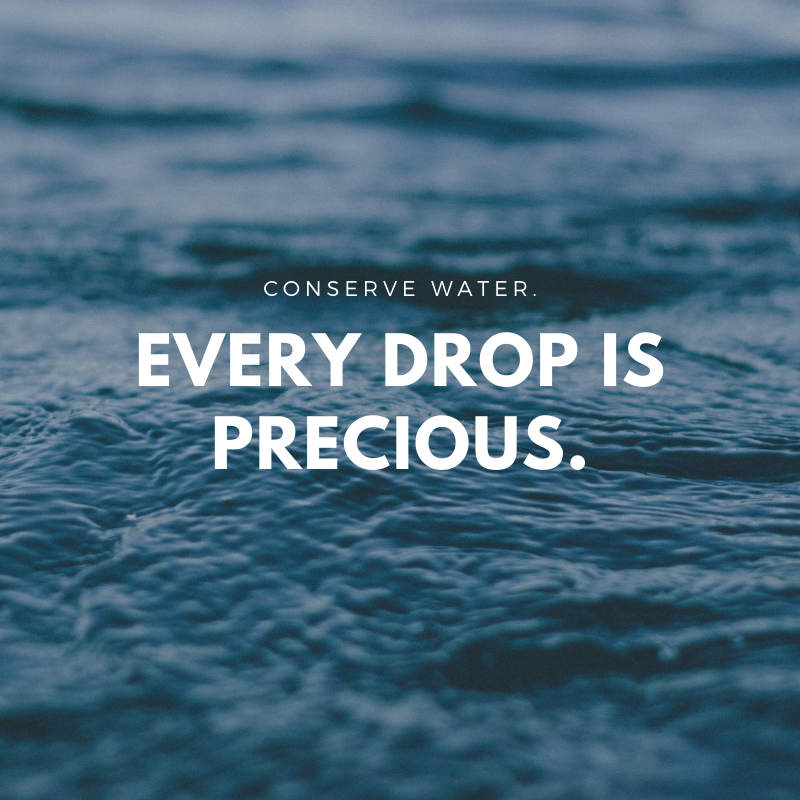 Saving water is the responsibility of every person who lives on earth. All the natural resources are to be protected. The level of water is reducing day-by-day, which can affect the future adversely. Some researchers found that in the future generation is very likely to face scarcity of water and a polluted environment. There is a sharp decline in global freshwater levels; humanity is facing a water crisis. The expansion of world populace, improved living benchmarks, changed utilization designs, and development of irrigation in horticulture are the key driving forces behind the rising demand for water worldwide. Deforestation, change in weathered-patterns (drought and floods), greenhouse gases, increased pollution, and wastage of water is causing insufficient supply. Water scarcity has many negative effects, such as adverse effects on river, lake, pond, etc. as well as other fresh water.

70% of the earth surface is covered by water. However, the freshwater available for drinking is only 2.5%. Rural people are unaware about the shortage of water on earth. In essence, only 0.007% of the planet's water is available to fuel and feed its 6.8 billion people.

Humans have proved to be reckless water users. It takes 2,400 liters or 630 gallons of water to produce an average hamburger. Moreover, many water-intensive crops, such as cotton, are grown in arid regions.

According to the United Nations, water use has increased at more than twice the rate of population increase in the last century. By 2025, around 1.8 billion people would live in areas plagued by water scarcity, with two-thirds of the world's population living in water-stressed regions as a result of overuse, growth, and climate change.

According to World Development Report, 2019

·        Global water demand is expected to continue to increase at a similar rate until 2050, accounting for an increase of 20 to 30% above the current level of water use, mainly due to rising demand in the industrial and domestic sectors.

·        Over 2 billion people live in countries experiencing high water stress, and about 4 billion people experience severe water scarcity during at least one month of the year.

Some places in India do not even have drinking water. India is facing water crisis at such a huge scale due to the lack of government planning, increased corporate privatization, industrial and human waste, and government corruption.

Niti Aayog report states that 21 cities in India including Delhi, Bangalore, Chennai, and Hyderabad are facing water crisis. 81% of all households have access to 40 litres of water per day through some source, about 18 to 20% of rural households in India have connections for piped water supply. This has created a mismatch in water availability and supply.

The World Health Organization prescribes 25 liters of water for one person a day to meet all basic hygiene and food needs. The extra water, according to the WHO estimates, is used for non-potable purposes like mopping and cleaning.

The report says that 40% of India’s population would have no access to drinking water by 2030. The effects of the drought are mostly found in rural areas. About 300,000 farmers have committed suicide in the past 25 years. Additionally, many farmers have deserted their crop and decided to move cities in search of work.

In rural areas, where there is a problem of water scarcity, people buy water from government tankers, according to their financial position. In Maharashtra, more than 6,000 tankers supply water to 15,000 villages every day - 1,000 of these are government tankers that provide water for free. During drought time, private operators sell water to people for business at the cost of Rs. 900 for a month.

According to government data, the average annual per capita water availability fell by 15% in 2001-2011. It’s predicted to fall by another 13% by 2025 and by 15% again by 2050. This means that in another 30 years, each Indian household will have about 1.1 million liters of water per year, down from 1.8 million liters in 2011. (A country is considered to be suffering from water scarcity when the availability is less than 1 million liters per capita per year).

In March 2020, the state of Gujarat stopped the supply of irrigation water from a major dam to save enough water for drinking purposes.

At present, there is too much demand of water and not enough supply. Such statistics show the extremely vulnerable situation of human life on Earth.

People waste water in huge amounts due to which they face problems like floods and droughts.

If we reduce the amount of water we use daily for various activities (bathing, watering plant, laundry, etc.), we are likely to conserve much water for the future. Stop throwing household waste (chemicals, polythene, etc.) in water. There are many places worldwide, where there is scarcity of water. Lack of water also causes natural disasters.

Reason for freshwater shortage is too much wastage of freshwater, improper usage for daily chores; pollution and wastage (chemicals, plastic, polythene etc.) of industries.

Unequal distribution of water resources is also a reason for water scarcity. Maharashtra faces droughts and famines in summer as they lack water resources. On the contrary, few regions of Orissa and Meghalaya face flood, tsunami etc. Water destroys lives ver there.

Most of the water bodies in rural areas are not fit fir consumption due to unavailability of sewage treatment plants and sanitation techniques. Overall levels of global pollutants are having a negative effect on the drinking water. The effluents, waste water, and chemicals from the industries and factories are discharged into the water bodies without treatment. It raises the temperature of water bodies; killing marine life, fishes, plants etc.; as well as the growth of micro-organisms polluting water. Another reason is that sewage lines are directly connected to mainline river bodies and pollute the freshwater.

The over use of ground water in agriculture results in decreased yields and wastage of water. More than 70% of water is exhausted due to ignorance of issues in pipelines like leakage and unwell watering techniques. Also, the groundwater is polluted due to excessive use of chemicals, fertilizers, DDTs, urea etc. by the farmers on agricultural land. This harms land and water alike. The groundwater is not worth drinking anymore and various diseases are borne into groundwater due to chemical mixing.

Poor regions often don’t have the funds or education to implement proper infrastructures such as waste treatment and recycling plants. Areas of extreme poverty often have to pay extortionate rates to purchase clean water. The people who have no money have to drink from holes in the dirt, or puddles on the roadside. The government should make conservation tanks for conserving rainwater.

Ways and Methods to Save Water

1.     During a drought, the value of water is realized. So, we might as well not waste it after or before a drought. One of the biggest mistakes people do is avoiding leakages in the house. If people get to know about the leakage problem, then they should resolve it as soon as possible, without wasting any time.

2.     Water your yard in the mornings and evenings. Minimum water is required during these times because the atmosphere is cooler and the sun is weaker. As a result, water evaporates slowly as comparison to when watering the yard in the middle of the day, when the sun is strong.

3.     Sometimes, people leave taps open or do not close it properly, especially in public areas. One drip per second equates to 19 liters of water per day. To stop this mistake, we should keep bowl downside to collect the drops of water and use that bowl water to water plants or even in toilet instead of using flush. In public areas, we should install push taps for reducing the wastage of water.

4.     Maximum amount of water is wasted in showers. Instead of using the shower, use a bucket. People should turn off the shower while using hair products and body washes, and limit their shower time to under five minutes.

5.     Do not turn on the tap while shaving, brushing, and washing your hand or face.

6.     Rain water harvesting is the best way to conserve water. Dig a rain barrel in the ground and collect rain water in it. Then, use it for irrigation and watering plants.

7.      The water that is use for cleaning pasta and vegetables can be reused in watering plant.

8.      Do not use water purifier it wastes 3 to 4 liters for purifying 1 liter of water. Instead of using, boil the water, which can help to remove any germs present in it.

9.     Improper training and education lead to the needless waste of safe clean water every day, as well as overuse in areas that don’t require so much water. Children must be educated about water scarcity and pollution in primary schools itself. They must be aware of problems like droughts, water scarcity among rural population, lack of water for farming, unavailability of food crops and crops destruction, etc. Children should know the value of water and the need to protect water resources.

10.   To save water for the future, the government should organize awareness campaigns in rural areas about the problems related to water and methods to conserve it.

11. Irrigation techniques and water conservation techniques are to be brought to the villages and strictly implemented in the cities. The awareness programs and channels should be broadcasted to make the farmers and rural population aware.

12. There should be water usage meters to calculate the actual usage by every household. Also, the municipalities, state governments, and central governments need to plan accordingly and try to minimize the usage. Giving incentives for less water usage in houses can encourage people to use water efficiently.

13. The industries are to be regularly checked and inspected so that they do not directly release the chemical effluents. There should be treatment plants inside factories, plants, etc. to process the effluents. Also, there should be proper infrastructure and guidelines to protect the water bodies. Similarly, the sewage isto be treated properly. These sewages must have other collection point that has sedimentation tanks, filtration plants, waste water treatment plants and then the effluents must be treated well. There should be proper pipelines and infrastructure to protect our water bodies. The government, municipalities, and states need to collectively make an action plan to conserve and protect the water bodies from pollution and wastage.

14. As a citizen, we need to abide by our duties and saving strategies to use water efficiently. To make other people aware and understand the value of water is necessary to conserve our planet.