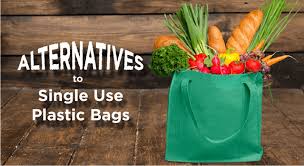 Increasing population, advances in technologies, all the modernisation after industrial era has led to an increase in the speed of manufacturing. Although we lead a very comfortable life full of luxuries, we are still faced with the ecological problems, the primary one being that of plastic which is ubiquitous. Starting from the food packaging in our refrigerator to the bags in which we throw garbage, it is all plastic.

Plastic is non – biodegradable, releases toxic chemicals, crowds the landfills and pollutes our river bodies. Not only are we polluting our own habitation space, but we also put fauna in threat as they are unaware of the danger that plastic can cause and consume it. They can end up choking on it and die. Birds often have bits and pieces of single use plastics stuck. We may talk about the ease plastic has brought it our lives but the statistics as to how cavalier we are with are usage of plastic are shocking.A person uses a plastic sack on average for less than 12 minutes. On average we only recycle one bag in every 200 we use. Each year, an estimated 500 billion to 1 trillion plastic bags are consumed worldwide. That comes bent over one million per minute. Billions end up as litter each year.

India is a country where 88 million people out of 1.2 billion Indians live below the poverty line. Thus, a need for products that have the virtue of being both affordable and eco-friendly is always on. We can be ignorant of the repercussions or we can make a conscious choice to deal with the problem hands- on.

Norway is working on Nanocellulose, which is made up of small plant material fibres or crystals in the plants’ cell walls.It has many advantages over plastic as it is biodegradable, non-toxic, can be extracted from agricultural and forestry waste products, it can hold string weights and it can be made transparent. This seems like a better choice, but it faces obstacles regarding cost of production, handling of material and its own composition. Alternatives are springing up around the world. Nestlé is launching new Kit Kat packaging in Japan, replacing the shiny plastic wrapping with paper. This will be a sustainable option and this paper can also be used for origami. TIPA which a start – up based in Israel has pioneered compostable flexible packaging.

Back at home, a store at Kolenchery town in Kerala’s Ernakulum district opened in 2018 it is a ‘7 to 9’ green store. This is a grocery store in which no plastic is used. People can bring their own containers and refill items. A 2% discount is given on every item which is taken home in a refill container in contrast with those people who do not bring their own containers are given cloth bags or glass bottles.

Until we can come up with in an effective and cheap alternative to plastic, we could replicate this model for all the shops in the country, especially megamarts generating revenue of crores per annum.