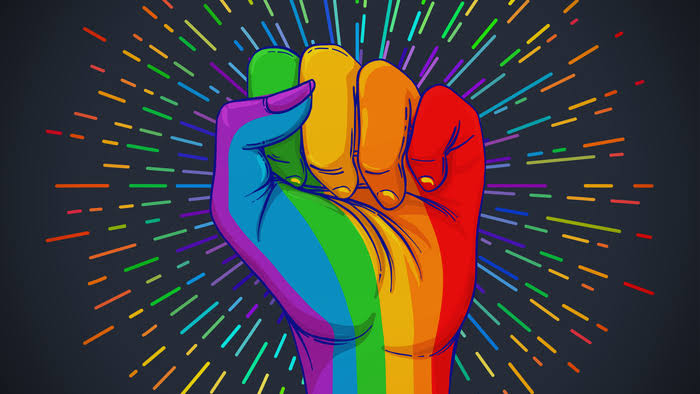 "What is straight? A line can be straight, or a street, but the human heart, oh, no, it's curved like a road through mountains.” — Tennessee Williams

In a landmark judgement, within the country for the LGBTQ+ community, the Bench of the Supreme Court, on September 6th 2018, after over a decade of legal battle, had struck down parts of the Section of the Indian Penal code, 1860 whereby making it unconstitutional for infringing the fundamental rights of the LGBTQ+ community. This British-era law was used frequently to harass lesbian, gay, bisexual, transgender, intersex, queer people in India. And excluding that the LGBT community additionally faced the acts of harassment, physical abuse, extortion and mental torture. Even Parliament turned a blind eye to the mutiny. Thus, the decision of the Supreme Court paved the way for a new golden era for the LGBT community.

The road to the rights of the LGBT community being recognised during this country has been a jolting one. there's no legal provision for same-sex marriages, LGBT couples or singles weren't allowed to adopt youngsters, featured discrimination at jobs, education and at homes. Moreover, even the health care professionals have been accused of discrimination towards individuals from the community, now and then classifying homosexuality as a mental state issue.

There is a maxim, “I am so divine so are you”, that vividly explains regarding the sexualities and their rights. It superbly explains the individuality of a personal is prime and it ought to be revered and therefore the judgement set down in Navtej Singh Johar & Ors. v. Union of India thr. Secretary Ministry of Law and Justice is such a landmark case of the Supreme Court of India in 2018 that not simply decriminalised consensual sex among adults in private, as well as homosexual sex, but additionally recognised the LGBT community as the ‘third gender’ and that they had equal rights as any other gender.

History of the Legislation:

Section-377: Unnatural offences: Whoever voluntarily has carnal intercourse against the order of nature with any man, woman or animal shall be punished with imprisonment for life, or with imprisonment of either description for a term which may extend to ten years, and shall also be liable to fine.

Explanation: Penetration is sufficient to constitute the carnal intercourse necessary to the offence described in this section.

Recap of the Legal battle:

The movement against Section-377 of IPC,1860 started when AIDS Bhedbhav Virodhi Andolan, in 1994, filed a petition seeking for repeal of the legislation enacted in 1862, following a public controversy over the Tihar Jail authorities’ refusal to provide condoms to the inmates. This group reportedly disbanded, and in 2001, Second petition was filed by Naz Foundation (India) Trust, in the New Delhi High Court seeking the same.

Between 2004-2008, Delhi High Court dismisses petition and activist moves Supreme Court which asks Delhi High Court to reconsider. Union health ministry filed contradictory affidavits. And the Centre submits gay sex is immoral, Delhi High Court strikes down affidavit of Centre. This was perhaps the year when the battle against Sec-377 started gaining momentum, and there was widespread support from a number of NGOs, government agencies and individuals.

Delhi High Court in 2009, in a historic judgement, decriminalised homosexuality. Religious groups and individuals challenge the verdict. But Supreme Court in December 2013 set aside the 2009 Delhi HC order, leaving matter for Parliament to decide.

In 2016, Apex Court constitutes three-judge bench to relook into pleas against Sec-377. And in August 2017, Supreme Court upholds right to privacy, says sexual orientation is essential component of identity and the rights of LGBT Community.

And on September 6th, 2018, The Constitutional Bench of Supreme Court gave this historic Judgement.

The five-judge bench of the Indian Supreme Court unanimously held that Section 377 of the Indian legal code, 1860, to that extent it applied to consensual sexual conduct between adults privately, was unconstitutional. The judgements declared that to that extent as Section 377 criminalizes consensual acts of adults (i.e., persons higher than the age of eighteen years World Health Organization are competent to consent) privately, is offensive of Article-14,15 and 19 and 21 of the Constitution. It was however clarified that,that such consent must be free consent, which is completely voluntary in nature, and devoid of any duress or coercion.

It was additionally declared that the striking down Section 377 shall not, result in the reopening of any ended prosecutions, however will definitely be relied upon all told unfinished matters.

With this, the Court overruled its call in Suresh Koushal v. Naz Foundation that had upheld the constitutionality of Section 377.

The Court relied upon its call in National Legal Services Authority v. Union of India to retell that identity is intrinsic to one’s temperament and denying constant would be offensive of one’s dignity.

Further, the Court relied upon its decision in K.S. Puttaswamy v. Union of India and held that denying the LGBT community has its right to privacy on the ground that they form a part of the population. It held that Section 377 results in an unreasonable restriction on the right to freedom to expression since consensual carnal intercourse in private does not in any way harm public decency or morality and if it continues to be on the statute books, it would cause a chilling effect that would violate the privacy right under Art. 19(1) (a). The Court affirmed that that intimacy between consenting adults of the same sex is beyond the legitimate interests of the state and sodomy laws violate the right to equality under Art. 14 and Art. 15 of the Constitution by targeting a segment of the population for their sexual orientation.

Moreover, the Court also relied upon its decisions in Shafin Jahan v. Asokan K.M. and Shakti Vahini v. Union of India to reaffirm that an adult’s right to choose a life partner of his/her choice is a facet of individual liberty.

While reading the judgement, Chief Justice Misra pronounced that the court found "Criminalising carnal intercourse" to be "irrational, arbitrary and manifestly unconstitutional".

The court held that LGBT people in India are entitled to all constitutional rights, including the liberties protected by the Constitution of India. It held that "the choice of whom to partner, the ability to find fulfilment in sexual intimacies and the right not to be subjected to discriminatory behaviour are intrinsic to the constitutional protection of sexual orientation”. The judgement also made note that LGBT community is equally entitled to citizenship and protection under law, without any discrimination.

There comes a time within the history of states whose concern cause a nation to hesitate and maybe even to succumb.Once that point comes, people who love liberty should rise to this occasion. A “miniscule minority” through its dour persistence has paved the way. As dark clouds loom over our very little freedoms, one hopes that the instance set by the LGBT community, conjures up alternative ‘lovers of liberty to rise to the occasion.’

The constitutional vision of justice accommodates variations of culture, ideology and orientation. And sexual orientation had become a target for exploitation, if not blackmail, however alternative formats in a very networked and digital age. However with scrapping off the parts of Section-377, the lives of the LGBTQ community could also be compact within the varied ways.

Individuals' happiness to sexual and gender minorities expertise stigma, discrimination and in some cases denial of care on account of their sexual orientation and identity. The "treatment" of homosexuality as a disorder has had serious consequences on the mental state and well-being of LGBT persons. Hence, repealing of 377 accelerates the acceptance of them conjointly as a part of the community.

The choice of sex is at the core of privacy. Media reports aforesaid the court upheld that the proper to privacy is intrinsic to liberty, central to human dignity and therefore the core of autonomy. These values are integral to the proper to life below Article twenty one of the constitution.

The scrapping of Section 377 conjointly paves the thanks to strengthen the Rights of Transgender Persons Bill 2014, the bill that granted a right to the transgender community.

The judgement given by the Supreme Court upholding the rights of the LGBT Community signals the start of a far required social modification in the country. What everybody wants is inclusive society to alleviate the sufferings of the LGBT community.

While we tend to celebrate the judgement, it's vital to recollect that Section 377 meant various things to totally different teams of queer folks. whereas for a few it absolutely was the symbolic damage of their need being selected as “unnatural,” for others it had a fabric significance in their everyday negotiations with harassment and violence in public.