The Environmental Impacts of Forest Fires. 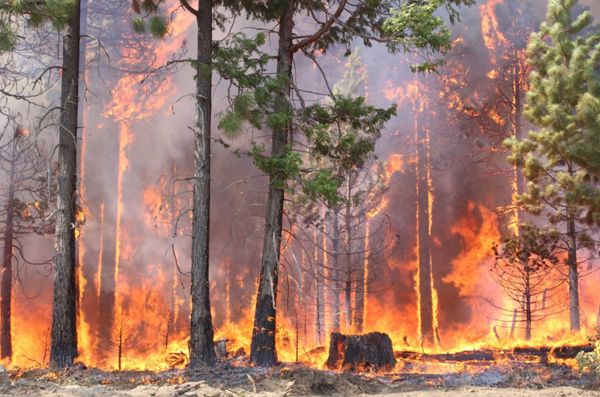 Wildfire is a part of nature. It plays a key role in shaping ecosystems by serving as an agent of renewal and change. But fire can be deadly, destroying homes, wildlife habitat and timber, and polluting the air with emissions harmful to human health. Fire also releases carbon dioxide—a key greenhouse gas—into the atmosphere. Fire’s effect on the landscape may be long-lasting. Fire effects are influenced by forest conditions before the fire and management action taken or not taken after the fire.

What causes wildfires in the first place? Three elements are crucial for the creation of a wildfire: fuel, oxygen, and heat. Firefighters often refer to this combination of elements as the fire triangle. On a hot day, drought conditions peak and something as small as a spark has the potential to create a large wildfire with devastating consequences. Although fire can occur naturally from the sun or a lightning strike, most wildfires are started by human carelessness. Unextinguished campfires, lit cigarette butts, improperly burned debris, and arson are responsible for 84% of wildfires started.Wildfires can have devastating impacts on human health as well as the ecology.

1.     Livelihood of forest dwellers: The poor are often hit hardest by global heating. They are the ones least able to adapt; they also tend to be more heavily reliant on natural resources, such as firewood, forest-based plant food and medicines. Forests provide food and medicines for indigenous peoples and many others. Many people’s livelihoods, especially in developing countries, depend on intact forest resources, and an abnormally large wildfire can be disastrous.

2.    Human Health: Smoke from wildfires causes air pollution and is bad for your health no matter where you live. Wildfires release harmful pollutants including particulate matter and toxic gases such as carbon monoxide, nitrogen oxides, and non-methane organic compounds into the atmosphere. Wildfires can cause displacement, stress and anguish to people who have to flee them, beyond those who suffer direct impacts.

3.    Gender Inequality:Women and girls, especially in developing countries, tend to be more at-risk during disasters such as megafires. According to the United Nations Development Programme, the poor are likely to live under circumstances that make them less likely to survive and recover from a disaster event. Studies have shown that disaster fatality rates are much higher for women than for men due, in large part, to gendered differences in capacity to cope with such events and insufficient access to information and early warnings.

4.    Improper water and sanitation facilities:Particulates and black carbon from forest fires are carried in the air and enter water courses. Air pollution causes or contributes to acidification of lakes, eutrophication of estuaries and coastal waters, and mercury bioaccumulation in aquatic food webs. This can contaminate the water sources most people rely on.

5.    Damage to Infrastructure:When they spread to urban or semi-urban areas, wildfires can damage infrastructure such as power lines, mobile phone masts and homes. Rebuilding may be costly or time consuming.

6.    Luxurious lifestyles:Extravagant lifestyles and unsustainable consumption of natural resources in many countries, and associated pollution, are contributing to global heating which in turn makes wildfires more likely.

7.    Greenhouse gas emissions:Wildfires release carbon dioxide (CO2) and other greenhouse gases into the atmosphere and contribute to global. Particles and gases from burning biomass can be carried over long distances, affecting air quality in regions far away. Particles can also land on snow and ice, causing the ice to absorb sunlight that it would otherwise reflect, thereby accelerating global warming. Wildfires on highly combustible peatland are particularly relevant for climate as they emit far more CO2 than ordinary forest or bush fires.

8.    Economic Impact:While humans have used fire to manage landscapes for thousands of years, current wildfires, exacerbated by global heating and drought, are growing in scale and impact, destroying houses, infrastructure and wildlife—affecting biodiversity. They can cause economic decline, at least in the short term.

As responsible citizens, there are some tips that we can keep in mind to prevent the spread of wildfires.

3.    Don’t throw lit cigarettes out of your moving car.

4.    Use caution while using flammable liquids.

6.    Only use fireworks in clear areas with no woods nearby.

Pay attention to the risk of forest fires in your area.