The Government of National Capital Territory of Delhi (Amendment) Act, 2021: A CRITIQUE 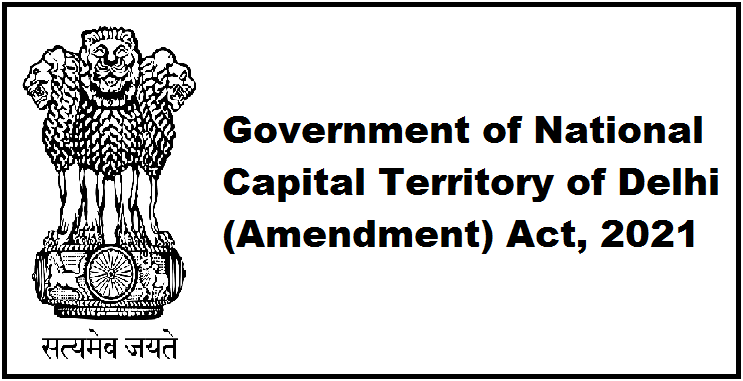 The Centre has notified a law that gives it more power over the city's elected government in the midst of a brutal second wave of Covid in Delhi. The "Government of Delhi" now refers to the "Lieutenant Governor of Delhi," who represents the Centre, under the amended law. This news came out as a major shock because it had a direct impact on the powers and workings of the Delhi state government. Also, it raised a vital question, i.e., whether it imposes a threat to democracy in India. Before delving into this news its crucial to understand the powers of a lieutenant governor. It's critical to understand the powers of a lieutenant governor before delving into this narrative.

However, with the Centre issuing a new rule stating that the city's elected administration must now seek the Lieutenant Governor before making any executive action, Delhi's lieutenant governor has effectively become the national capital's in-charge. the ministry of home affairs announced in a notification that, “In exercise of the powers conferred by sub-section (2) of section 1 of the Government of National Capital Territory of Delhi (Amendment) Act, 2021 (15 of 2021), the Central Government hereby appoints the 27th day of April, 2021, as the date on which the provisions of the said Act shall come into force.”

On March 15, 2021, the Government of National Capital Territory of Delhi (Amendment) Bill was tabled in the Lok Sabha. The bill amends the Government of the National Capital Territory of Delhi Act of 1991. The Act establishes the foundation for the Legislative Assembly and the governance of Delhi's National Capital Territory (NCT). The bill modifies several authority and responsibilities. The bill modifies the Legislative Assembly's and Lieutenant Governor's powers and responsibilities. The Restriction on legislation was enacted by the Assembly as the bill stipulates that any reference to “government” in a legislation enacted by the Legislative Assembly must relate to the Lieutenant Governor (LG). This act provides the rules for the procedure of assembly by empowering the Legislative Assembly to enact Rules that govern the procedure and conduct of business in the Assembly. The Bill stipulates that such rules must be in accordance with the Lok Sabha's Rules of Procedure and Conduct of Business. The Bill also prevents the Legislative Assembly from enacting any rule that would allow it or its Committees to: (i) evaluate the day-to-day administration of the NCT of Delhi, and (ii) undertake any investigation into administrative decisions. Furthermore, the Bill states that any such rules enacted prior to its implementation shall be null and invalid. The LG is required by the Act to hold certain bills passed by the Legislative Assembly for the President's consideration. These Bills are those that may limit the High Court of Delhi's powers, (ii) which the President may direct to be reserved, and (iii) deal with the Speaker, Deputy Speaker, members of the Assembly, and Ministers' salaries and allowances or (iv) pertaining to the Assembly's or Delhi's NCT's official languages. The bill also requires the LG to reserve for the President any bills that involve subjects that are outside the scope of the Legislative Assembly's powers. All executive actions made by the government, whether on the advice of the Ministers or otherwise, must be done in the name of the LG. It further specifies that before taking any executive action on the Minister's/Council of Ministers' decisions, the LG's opinion must be solicited on specific subjects as stated by the LG.

Several legal and constitutional experts, including former Lok Sabha secretary general PDT Achary, NALSAR University of Law vice-chancellor Faizan Mustafa, and Congress MP and senior counsel Abhishek Manu Singhvi, feel the Centre's justification for the new concept of government in Delhi is flawed. They argue that because the L-G is a nominee of the Centre and not a member of the elected government, he is not bound by the laws, policies, and programs established by the Delhi Assembly or recommended by the state's council of ministers, although being named the Government under the amendment. Also, if political unrest or some other circumstance necessitates the imposition of President's Rule in Delhi, how would the L-G advise the President, given that he, not the elected representatives, would form the government? The Delhi Assembly would be required to follow the same norms of conduct as the Lok Sabha. Every Legislature is distinct within the constitutional structure. While the conduct standards for various assemblies are similar, as Singhvi pointed out in the Rajya Sabha, there is no statute or constitutional provision that mandates consistency in conduct rules throughout legislatures, and definitely none that states an assembly's standards must be the same as the Lok Sabha's. Despite the fact that the Rajya Sabha and the Lok Sabha are both Houses of Parliament, the Rajya Sabha and the Lok Sabha have different conduct rules. Aside from the obvious issue of legislative delays caused by differences of opinion between the L-G and the elected administration, this change would also slow down the government's overall operations.

The administrative powers of the government are at the heart of governance. The aim of the elected government will be defeated if such powers are restricted. As a result, it's difficult not to notice the political motivations behind the change. Many perceive this as the BJP broadening its horizons in order to negate Delhi's special status and elected government. It remains to be seen if the NCT of Delhi (Amendment) Act, 2021 is challenged before it reaches the courts. And if the challenge can be sustained.