THE NEED FOR POLICE REFORMS IN INDIA 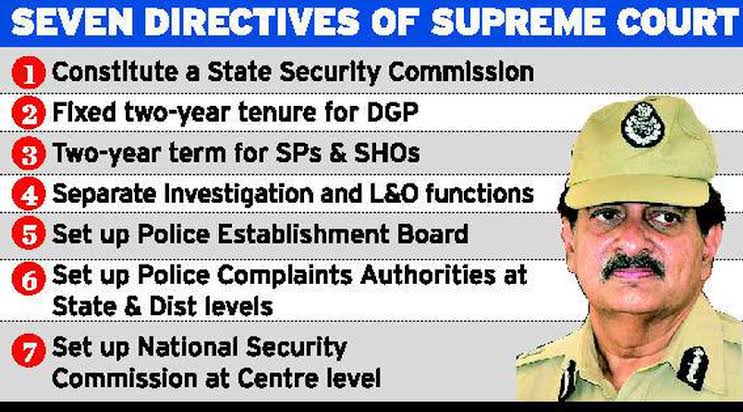 A well-organized and well-ordered police system facilitates a country politically, socially, and economically. A strong and efficient police force helps in maintaining a sense of security and safety withinside the minds of residents. It enables them to go about their everyday obligations nonchalantly without worrying about getting attacked, robbed, or face some other crime. The presence of a dependable police force facilitates because it prevents the accumulation of any worry withinside the minds of the citizens regarding any threat to the lives of their cherished ones and themselves as well. For a massive nation like India with a populace of 1.4 billion individuals, a sturdy police body is an absolute necessity for the protection and safety of its residents. For India unfortunately, the present-day police system provides a dismal picture. In the latest response withinside the Parliament, the government disclosed that among 1 April and 30 November 2015, 25,357 cases had been registered beneath the police category which involved 111 deaths in police custody, 330 instances of custodial torture, and 24,916 in others. These statistics factor out the corroded truth of our police machinery. It emphasizes the necessity to make police accountable and carry out police reforms.

WHAT ARE POLICE REFORMS?

Before going into reforms, we have to apprehend the genuine meaning of the words ‘reforms’ first. The Police reforms aim to remodel the values, culture, policies, and practices of police organizations. It envisages police to carry out their duties with respect for democratic values, human rights, and the rule of law. It additionally ambitions to enhance how the police interact with different components of the security sector, consisting of the courts and departments of corrections, or executive, parliamentary or independent authorities with management or oversight duties.

AN OUTLINE OF THE INDIAN POLICE SYSTEM

Let us begin with a bit of introduction to India’s police system. The Indian constitution, under Schedule VII, presents a threefold distribution of legislative subjects & lays down 3 lists. These lists divide the subjects among the Centre and the States. Under this distribution, police is a subject governed by states. Therefore, each of the 28 states has its police forces. The centre is likewise allowed to maintain its police forces to assist the states with ensuring law and order. Therefore, it maintains seven central police forces and a few other police organizations for specialized duties consisting of intelligence gathering, investigation, research and recordkeeping, and training. The primary function of police forces is to uphold and enforce laws, probe crimes and make certain the security for people withinside the nation. In such a large and populous country like India, police forces have to be well-equipped with personnel, weaponry, forensic, communications, and deliver support to carry out their function well. Further, they must have the operational freedom to perform their duties professionally, and in first-rate working conditions (e.g., regulated operating hours and promotion opportunities), whilst being held responsible for bad overall performance or misuse of power. Thus we can say that the police forces in our country have an obligation towards its citizens.

We already know that the purpose of the police reforms is to rectify the mistakes of the existing system and to fill in the loopholes. We've acknowledged in the definition of ‘police reforms’ that the police have a sense of obligation in the direction of the residents. We additionally need to take heed to the accountability they possess towards the governmental executives. Now let’s identify the faults in the existing system.

Both the central and state police forces come underneath the management and superintendence of the political executive (i.e., central or state government). The Second Administrative Reforms Commission (2007) has mentioned that this management has been abused in the past by the political executive to unduly impact police employees, and have them serve non-public or political interests. This interferes with professional decision-making by the police (e.g., regarding the way to respond to law and order situations or how to conduct investigations), ensuing in the biased overall performance of duties. To permit the police's greater operational freedom whilst at the same time ensuring accountability, numerous experts have advocated that the political executive’s power of superintendence over police forces be constrained. It has been endorsed through The Second Administrative Reforms Commission, that the power must be confined to promoting professional efficiency and making sure that police are acting under law & regulations. Alternatively, the National Police Commission (1977-81) recommended that superintendence be described in the law to exclude instructions that intervene with due process of law or that influence operational decisions, or that unlawfully impact the transfers of the police personnel, recruitment, etc. The Supreme Court has additionally issued guidelines to states and the centre in 2006 in this regard.

(2) ABUSE OF POWER BY THE POLICE

According to the National Crime Records Bureau, between 2010 and 2015, 591 people died in police custody. Police blame maximum of the deaths on suicide, illness, or natural causes. Case in point, of the ninety-seven custody deaths stated by the Indian government in 2015, police records list only 6 as due to physical attack by police; 34 are indexed as suicides, eleven as deaths because of illness, nine as natural deaths, and 12 as deaths at some stage in hospitalization or treatment. However, in lots of such instances, family members allege that the deaths were the result of torture. The Second Administrative Reforms Commission and the Supreme Court have observed that there is a need to have an impartial/independent complaints authority to inquire into cases of police misconduct. This may be due to the fact that the political executive and internal police oversight mechanisms might also additionally favor regulation enforcement authorities, and now no longer be capable of forming an impartial and vital judgment.

(3) OVERBURDENING OF THE POLICE FORCE

While the sanctioned police strength was 181 police consistent with lakh individuals in 2016, the actual strength changed into 137 police. This is extremely low in comparison with the United Nations’ advocated standard of 222 police consistent with lakh individuals. Further, an excessive percentage of vacancies in the police forces exacerbate the present hassle of overburdened police personnel. The Second Administrative Reforms Commission has advocated that one manner to lessen the load on the police forces could be to outsource or redistribute a few non-core police duties (including traffic control, catastrophe rescue and relief, and issuing of court summons) to government departments or non-public agencies. These functions do no longer require any unique expertise of policing, and consequently may be carried out via way of means of other agencies. This will even permit the police forces to provide greater time and energy to their core policing functions.

The constabulary issues can be divided in addition into sub-issues, which include, Qualifications & Training; Promotions & running conditions; Housing-associated issues. The constabulary constitutes 86% of the nation's police forces. A constable’s obligations are wide-ranging and aren't confined to primary obligations. A constable is presumed to have several analytical and decision-making capabilities, and the potential to address people with tact, understanding, and firmness. The Padmanabhaiah Committee and the Second Administrative Reforms Commission have mentioned that the entry-degree qualifications (i.e. completion of class 10th or 12th in lots of states) and education & training of constables now no longer qualify them for their position. One of the suggestions made in this regard has been to enhance the qualification for entry into the civil police to class 12th or graduation. It has additionally been advocated that constables, and the police force in general, must obtain greater education & training in soft skills (consisting of communication, counseling, and leadership) given their role of dealing with the public regularly. The Second Administrative Reforms Commission has, in addition, mentioned that the promotion possibilities and working conditions of constables are terrible, and have to be improved. Generally, a constable in India can anticipate only one promotion in his lifetime and normally retires as a head constable, which weakens his incentive to carry out his duties well. Further, in India occasionally superiors employ constables as orderlies to do domestic work, which reduces their morale and motivation and takes them away from their core policing work. The Commission endorsed that the orderly system is abolished throughout the states. The significance of imparting housing to the constabulary (and normally to the police force) to better their efficiency and incentive to simply accept far-flung postings has additionally been emphasized via way of means of expert bodies, which include the National Police Commission. This is due to the fact, in far-off and rural areas, private lodging won't be available without difficulty for rent. Even in metropolitan areas, rents may be prohibitively excessive, and adequate lodging might not be available in the vicinity of the police stations affecting their operational performance.

Another paramount problem confronted by the law enforcement officials in India is ‘poor police infrastructure & modernization’. Modern policing calls for robust communication support, contemporary or cutting-edge weapons, and an excessive degree of mobility. However, CAG audit reports of the year 2015-16, have observed shortages in weaponry with the country's police forces. For example, Rajasthan and West Bengal had shortages of 75% and 71% weaponry respectively. The Bureau of Police Research and Development has additionally mentioned a 30.5 deficiency in the inventory of required vehicles with the nation's forces. The Modernization of Police Forces (MPF) scheme was initiated in 1969-70 and has undergone numerous revisions over the years. However, there's a need to completely utilize the finances sanctioned by the government. MPF scheme envisages Procurement of cutting-edge weapons, mobility of police forces, logistics support, up-gradation of police wireless, etc., National satellite network.

Other than these, the contemporary-day police system additionally faces a few small however potent issues, like-

WHY ARE THE SOLUTIONS STILL UNIMPLEMENTED?

The above-mentioned issues are of grave concern to the police and the Judicial system as well. Alongside the above-mentioned issues, the appropriate solutions, provided by authorities like the Supreme court, UN, various think tanks, etc. which too have been stated above, have not been implemented. This is due to another core governmental issue in India, i.e., ‘Lack of political will'. An example of a display of weak political will would be the non-implementation of the seven directives given by the Supreme court in the landmark case of Prakash Singh (2006). Due to the dearth of political will, those directives had been not been carried out in letter and spirit in lots of states.

The seven directives are:- Limit political management, Appoint based on merit, Fix minimum tenure, Separate police functions, Set up fair and transparent systems, Establish a police complaints authority in each state, Set up a selection commission.

Police reforms were on the schedule of Governments nearly since independence however even beyond 50 years, the police are visible as selectively efficient, unsympathetic to the destitute, poor & underprivileged. It is in addition accused of politicization and criminalization. In this regard, one must be aware that the fundamental framework for policing in India was made far back in 1861, with little modifications thereafter, while at the same time, the society has gone through dramatic modifications, especially during the post-independence times. The public expectations from police have increased and more recent styles of crime have surfaced. The policing machinery must be reformed to be in tandem with present-day eventualities and upgraded to efficaciously deal with crime and criminals, uphold human rights, and protect the valid pursuits of one and all.