Toxic Rain: The Effect of Acid Rain on the Environment. 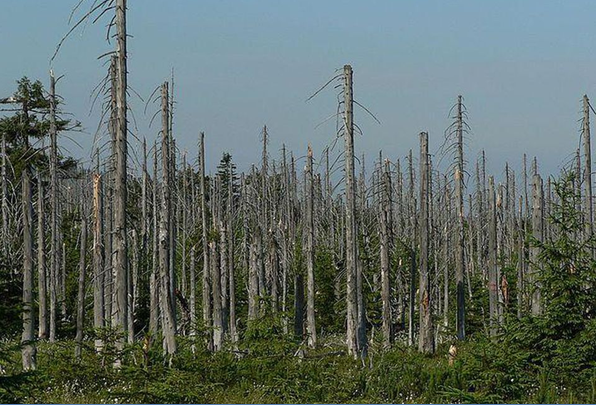 Acid rain, or acid deposition, is a broad term that includes any form of precipitation that contains acidic components, such as sulfuric acid or nitric acid.

Though manmade pollutants are currently affecting most acidic precipitation, natural disasters can be a factor as well. For example, volcanoes can cause acid rain by blasting pollutants into the air. These pollutants can be carried around the world in jet streams and turned into acid rain far from the volcano.

Acid rain can have tragic effects on both humans and the environment around us.

1.     Impact on Human health: Acid rain can cause respiratory diseases, or can make these diseases worse. Respiratory diseases like asthma and bronchitismake it hard for people to breathe and can even cause permanent lung damage. The pollution that causes acid rain can also create tiny particles. When these particles get into people’s lungs, they can cause health problems, or can make existing health problems worse. Swimming in an acidic lake or walking in an acidic puddle can also prove to be harmful to people.

2.    Impact on Plants and Trees: Dead or dying trees are a common sight in areas effected by acid rain. Acid rain leaches aluminium from the soil. That aluminium may be harmful to plants as well as animals. Acid rain also removes minerals and nutrients from the soil that trees need to grow.

At high elevations, acidic fog and clouds might strip nutrients from trees’ foliage, leaving them with brown or dead leaves and needles. The trees are then less able to absorb sunlight, which makes them weak and less able to withstand freezing temperatures.

3.    Impact on Fish and Wildlife: The ecological effects of acid rain are most clearly seen in aquatic environments, such as streams, lakes, and marshes where it can be harmful to fish and other wildlife. As it flows through the soil, acidic rain water can leach aluminium from soil clay particles and then flow into streams and lakes. The more acid that is introduced to the ecosystem, the more aluminium is released.

Some types of plants and animals are able to tolerate acidic waters and moderate amounts of aluminium. Others, however, are acid-sensitive and will be lost as the pH declines. Generally, the young of most species are more sensitive to environmental conditions than adults. At pH 5, most fish eggs cannot hatch. At lower pH levels, some adult fish die. Some acidic lakes have no fish. Even if a species of fish or animal can tolerate moderately acidic water, the animals or plants it eats might not. For example, frogs have a critical pH around 4, but the mayflies they eat are more sensitive and may not survive pH below 5.5. As a result., acid rain not only affects a single animal, but an entire ecosystem and the food chain as well.

So, what’s the solution here? There are several solutions to stopping manmade acid rain. Regulating the emissions coming from vehicles and buildings is an important step. This can be done by restricting the use of fossil fuels and focusing on more sustainable energy sources such as solar and wind power.

At the microscopic level, each person can do their part by reducing their vehicle use. Using public transportation, walking, riding a bike or carpooling is a good start. People can also reduce their use of electricity, which is widely created with fossil fuels, or switch to a solar plan. Many electricity companies offer solar packages to their customers that require no installation and low costs. The solution to the problem of acid rain lies as much in the hands of the individual as in the hands of the government.